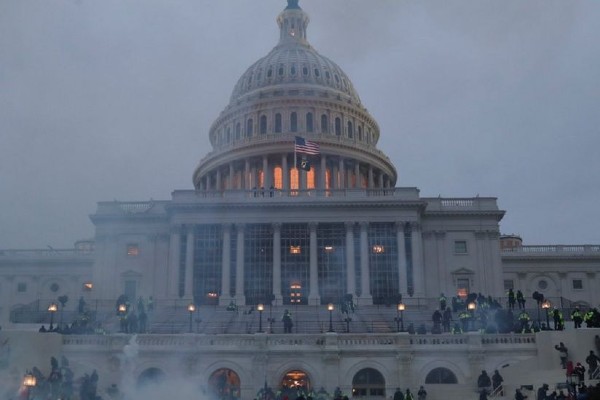 LGBTQ+ activists and political players have called for the immediate removal of Donald Trump after riots broke out in Washington DC, perpetrated by Trump supporters. Huge gatherings of right-wing extremists, who back the former US president, successfully stormed the country’s capital on Wednesday January 6, as congress met to officially count the Electoral College votes of the 50 states and Washington DC. So far, four people have been killed during the riots.

Both Republicans and Democrats have strongly criticised Trump, with politician and LGBTQ+ activist, Sarah McBride – the first trans state senator in US – speaking out against Trump and the rioters on Twitter: “CNN is right to use the term ‘insurrectionists’ and to call this an ‘attempted coup’. This is shameful and is a direct result of the rhetoric and actions of Donald Trump, Ted Cruz, and Josh Hawley.”

Gay congressman, Mondaire Jones, said on the Medhi Hasan Show that Trump was “the main cheerleader for the violent insurrection” that occured in Washington DC. He continued:  “What happened today is never supposed to happen. This is a routine certification of a free and fair election. There was no voter fraud, and to the extent there was voter suppression, it was our Black and brown voters in places like Georgia who were Democratic voters. And it’s just so shameful what’s happening, it’s why I called for the expulsion of my Republican colleagues who have participated in these objections.”

Rea Carey, executive director of the National LGBTQ Task Force, called for Trump to be “immediately removed” from office through the 25th Amendment: “Donald Trump has been, continues to be, and will remain a threat to democracy, the US Constitution, and human life every day he remains in office While his attempted coup has failed, he and his supporters are a threat to democracy and will be as long as he is in power.” GLAAD president, Sarah Kate Ellis, also urged Facebook and Twitter to permanently ban Trump from their platforms, tweeting: “It’s time to take real steps towards security, safety and justice for all.”