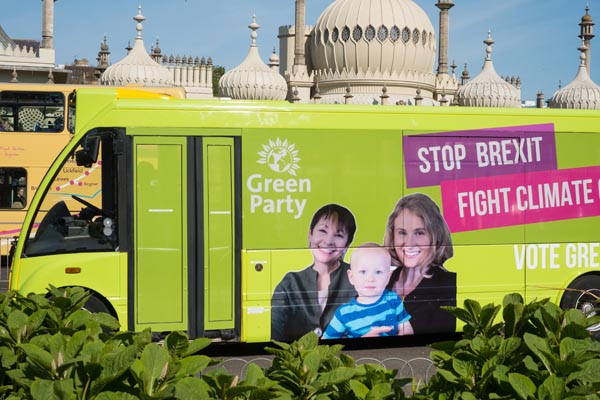 Latest polling from highly respected YouGov shows the Greens in the South East are on track for the election of two Green MEPs in todays European elections.

THIS would mean that Elise Benjamin, former Lord Mayor of Oxford, would join the new Mayor of Brighton & Hove, Cllr Alexandra Phillips in the European Parliament as MEP from July.

It would also mean that Remain parties in the South East would occupy four EU seats, instead of the current two, depriving pro-Brexit parties of a seat.

Lead Green candidate in the South East, Alexandra Phillips, said: “The polls also show that people are leaving behind the discredited idea of voting tactically, as under the proportional system, that won’t guarantee more Remain MEPs and could actually split the vote further, to the benefit of Nigel Farage’s Brexit Party. Instead, people are intending to vote for who they really believe in: the party that will really address the greatest crisis we face – the climate – as well as saying no to Brexit.”

Elise Benjamin, second candidate on the Greens’ South East list, added: “As we’ve toured the South East in our all-electric Stop Brexit Bus, as we’ve held rallies, knocked on doors and received a great deal of warm applause in hustings, it’s been clear that support for Greens has been growing rapidly. It’s support for our Green message that says no to Brexit and yes to working with fellow Green MEPs across the entire continent of Europe, to lift the world out the climate crisis.

“It’s vital now that the UK elects as many Green MEPs as possible because if there’s enough of us in the EU, we can do this. We can make the difference the world needs.”

The poll also has the Green Party nationally at 12%, well ahead of the Conservatives’ 7% and within overtaking distance of Labour’s 13%. The Lib Dems nationally are polling nationally at 19% following a late surge after their showing in the recent local election.

The Greens’ all-electric Stop Brexit Bus will be in Brighton and Lewes today (May 23), accompanied by Caroline Lucas MP after touring yesterday in Kent, Nigel Farage’s back yard.