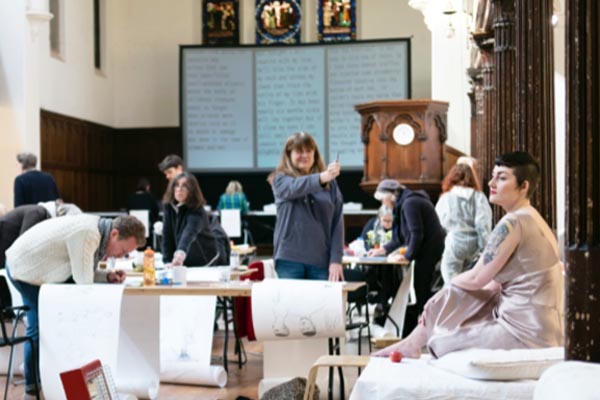 Brighton’s contemporary art gallery Fabrica raise over £21,000 in a crowdfunding appeal to rescue its finances in light of recent funding cuts.

In just 28 days, the appeal attracted 424 backers who picked up rewards including original artwork donated by artists Fabrica has presented over the last 22 years. Many also donated money without selecting a reward, and the charity raised an additional £10,000 through a sponsored writing and drawing event it hosted in February.

Fabrica, has been the heart of the arts communities in Brighton & Hove for 22 years. They ran the appeal in light of losing a £20,000 regular grant from Brighton & Hove City Council last year. Despite cost reduction measures Fabrica faced a gap in its finances that it needed to fill by the end of March 2018.

Director Liz Whitehead, one of the original founders of Fabrica in 1996, said: “We have been completely bowled over by the response to the campaign. It’s been truly brilliant to see how much support we have in the city and beyond. Instead of thinking about which areas of the programme we might have to cut, we are now giving thought to what impact we can make with the additional money we raised!

“We feel that our campaign has raised Fabrica’s profile in the city and that people who may not have visited before will come to the gallery. I believe it has also highlighted the positive work we do with some of the city’s most vulnerable people, to reduce social isolation and improve people’s wellbeing.”

Artist Jane Fordham, who together with poet Jackie Wills organised the  drawing event – named the Draw-A-Thon and Writers’ Relay event – said: “We’re so delighted with the success of the sponsored event. It’s been a fantastic way to mobilise Brighton’s artistic community in raising funds for Fabrica, which has supported local artists for many years”.

The success of the appeal means that the charity will not have to close its doors or cut its programme. Fabrica has said that it will direct the additional funds raised towards its exhibition programme, its artist development work and community activities such as Chomp, a free creative lunch club for families managing on a low-income.