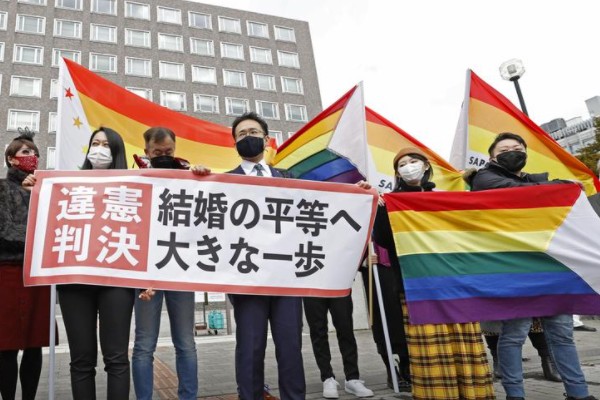 A district court in Japan has ruled that criminalising same-sex marriage in unconstitutional, after 13 same-sex couples filed a lawsuit against the government in 2019 due to it being the only G7 country which has not yet enforced marriage equality regulations. According to Reuters, the landmark ruling, made by the Sapporo district court, stated: “Sexual orientation cannot be changed or selected by a person’s will. It is discriminatory treatment…that they cannot receive even some of the legal benefits that heterosexuals do.”

Japan’s constitution outlaws forced marriage, with the lawyers of the 13 couples arguing these regulations should not apply to same-sex unions. The court ruling confirmed this, after which plaintiffs and activists displayed rainbow banners outside the court in celebration. One of the lawyers, Takeharu Kato, described the verdict as “revolutionary”, and hopes the government will shortly begin discussing the possibility of marriage equality.

One of the plaintiffs told the BBC: “This is one huge step forward in Japan… We are moving closer to making our dream come true.” LGBTQ+ activists and same-sex couples are hoping Japan will follow in Taiwan’s footsteps after it became the first Asian country to legalise same-sex marriage in 2019.