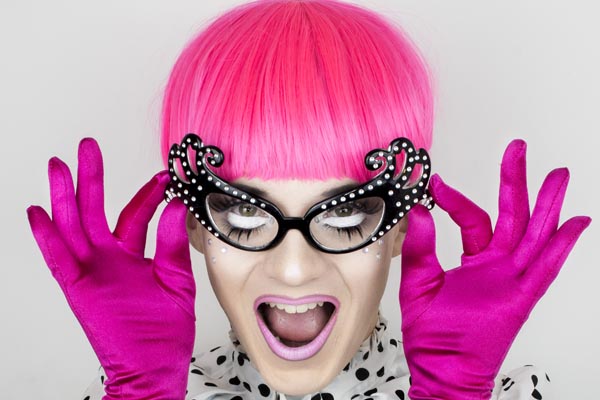 Graham Robson catches up with Drag Prince Alfie Ordinary, lover of sequins and all things camp and fabulous, who has been making waves with his award winning cocktail of storytelling and song, Help! I Think I Might Be Fabulous – spreading his positive message not only here but as far afield as the USA and Australia!

) Tell us a bit about yourself… I’m the son of a drag queen, which makes me a Drag Prince! I love drag, and moving to Brighton I got to see all the amazing local queens around town and how their shows work. I have learnt so much from them, which I hope you can see in my shows. I love anything camp, anything uplifting and anything fun!

) Now the glitter has settled, how was Pride? I had a great Pride, thanks. I spent the morning watching the parade at the North Laine Brewhouse, the home of my bottomless brunch that I do every Saturday. It’s really lovely there with great music and lovely bar staff. Then I went up to the park to perform alongside Lorraine Bowen, Joe Black, Ginny Lemon, Miss Disney and others at Paul Diello’s Queertown stage. And then, of course, I went to see Britney! After that, I played my favourite camp songs at the Pav Tav. All in all it was gorgeous!

) What gets you up in the morning? Usually my alarm, or the sun blazing through the blinds! Sometimes I try and go back to sleep but most of the time I can’t. I’m a believer in the term Carpe Diem!

) You performed Help! I Think I Might Be Fabulous in Australia. What was it like performing to audiences down under? After winning the International Touring Bursary at Brighton Fringe, I was invited to Amsterdam Fringe to perform the show there. I met a lovely man called Jared who was there scouting for shows for Adelaide Fringe. He then became my producer and booked a run in Australia. It was such a wonderful month, meeting incredible artists and seeing amazing shows.

) It must have been terrifying? It’s always nerve wracking performing to a new audience, but it’s what helps push you as an artist and keep you on your toes.

) What’s going on with Brighton’s underground queer scene? It’s very exciting! The beauty of drag is that it’s so broad, accessible and welcoming. Every drag scene has a great underground scene existing alongside it and Brighton is no exception. There are loads of really exciting new queens and kings all trying out drag and pushing the boundaries of what drag can be.

) Brighton Fringe must be a great vessel for that? Yes, at Brighton Fringe I teamed up with Traumfrau’s Roni Guetta and produced the ‘Brighton Big Drag Pageant’ in the Spiegeltent. It was incredible! We had 30 drag performers of varying age, genders and styles competing in a classic pageant style format with a ‘Best Drag’ runway round providing the audience with the most tearaways in 10 minutes they’ve ever seen, followed by a talent round. The top two was peak Brighton – a showdown between Arran Shurvinton’s Nosferatu, a 7ft tall vampire with a glorious taste for 17th Century glamour, versus Smashlyn Monroe, the fierce tattooed ‘queen of sideshow’ who stood completely nude. The audience, on their feet the entire time, eventually crowned Nosferatu as the winner! I can’t wait to do it all again next year!

) Describe Alfie’s signature look… I try and make Alfie’s outfits look like they were made by his mum (the drag queen). Think Sunday best, but sequins. A birthday party suit, but polka dots. Anything bright, sparkly – the occasional bold print. I’ve also been inspired by iconic boy characters like Pinocchio and Peter Pan, and I’m trying to create my own specific ‘boy drag’ look.

) Who or what inspires you? Locally, every person that takes the time to get on stage and entertain an audience inspires me. Getting into drag isn’t easy, it’s not always fun and it’s exhausting so I appreciate everyone that does it. I’m inspired by the older generation of queens that have paved the way for us, keeping drag alive and well in our gorgeous city and I’m constantly learning from them. David Hoyle was a huge inspiration to me. He was the first drag performer that I saw that made me realise that you didn’t have to follow all the rules and spoke honestly and passionately about the state of the world we live in today. The people I meet also inspire me. Everyone has their own unique story and their own reason for coming to a drag show.

) What’s next? Who knows? As long as there are shows to do, I’ll keep doing them. Christmas is the most wonderful time of the year, so I’ll be bringing Alfie Ordinary’s Christmas Special back to Brighton. It’s my dream to have a camp television chat show, and this is the nearest I can get to it for now. I’m also working on a new theatre show, the follow up to Help! I Think I Might Be Fabulous. If all goes well, I’ll be debuting it at Brighton Fringe. I’m also bringing back a variety show that I used to host in Chichester with Cherry Liquor called the Car Boot Cabaret, which is a cabaret show based loosely on objects found at car boot sales. I’m also in talks about going back to Australia next year for a tour and thinking of taking my show to Edinburgh. So I guess it’s going to be a busy year next year. No rest for the fabulous!