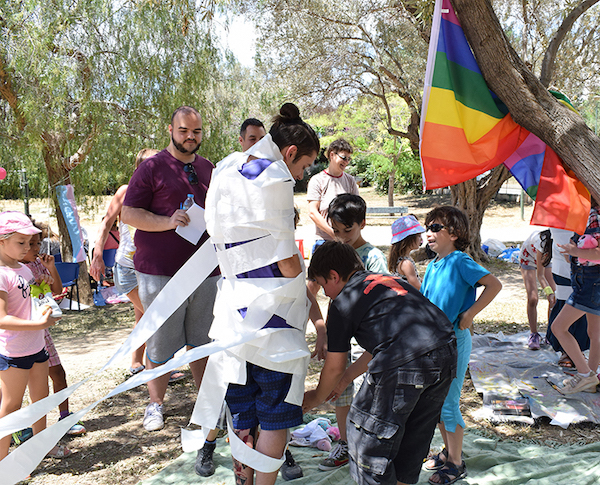 On Sunday, May 1, rainbow families around the world as well as their friends and allies will get together to celebrate the 11th edition of International Family Equality Day (IFED) – an annual LGBTQ+ awareness day that promotes family equality and human rights for everyone. What began as a humble initiative in 2012 has by now grown into an international movement: last year’s IFED was commemorated in 67 countries and 214 cities across the globe.

This year’s IFED motto, Family Equality is Everybody’s Business, invites everyone to celebrate diversity and support families in all their colours and forms. “In many ways, rainbow families’ everyday life is the same as for traditional families,” says IFED Co-President Matcha Phorn-In.

“And yet, too many of us still experience discrimination on a daily basis – whether it means being denied parental leave or needing authorisation to pick up your own child from school, whether it is not being represented on official forms or, worse, having to hide your family for fear of prosecution, to name just a few examples.

“Rainbow families are just families, but the difference lies in the fact that in many Asian countries, e.g. Thailand, the lack of marriage equality also means a lack of economic, social, cultural support and protections.

“As the right to family life is a basic human right for all citizens regardless of sexual orientation, gender identity, gender expression or sex characteristics, advancing that right through marriage equality is everyone’s business.”

According to IFED, everyone can do their part in creating an environment in which family diversity is visible, legally protected and celebrated. “It’s all about educating yourself and others, about using an inclusive language as well as speaking up and taking action whenever discrimination takes place”, says IFED founder Maria von Känel.

“And, of course, joining the IFED family is a great way of showing support.” Regarding the logistics of next month’s IFED celebrations, the same holds true as for last year’s. “Depending on the Covid regulations and conditions in each country, the IFED family is going to celebrate online, at home or in groups outside”, says von Känel. “Just as we did in the past two years, we’ll find different ways to commemorate this special day and spread our message of equality and inclusiveness.”

The need for protection of LGBTQ+ families is also highlighted by the humanitarian tragedy of the many refugees throughout the world. “People and families are in danger in Afghanistan, Syria, Palestine and Ukraine”, says IFED board member Dettie Gould and points to specific challenges for LGBTQ+ families.

“How many rainbow families may well be crushed by the pressure of having to remain silent in order to protect themselves from abuse as they migrate to safety, only to end up separated by discrimination and non-recognition of their family status. What we need are specific measures to ensure that all types of family get to remain united.”

For more info on IFED and to get involved, CLICK HERE