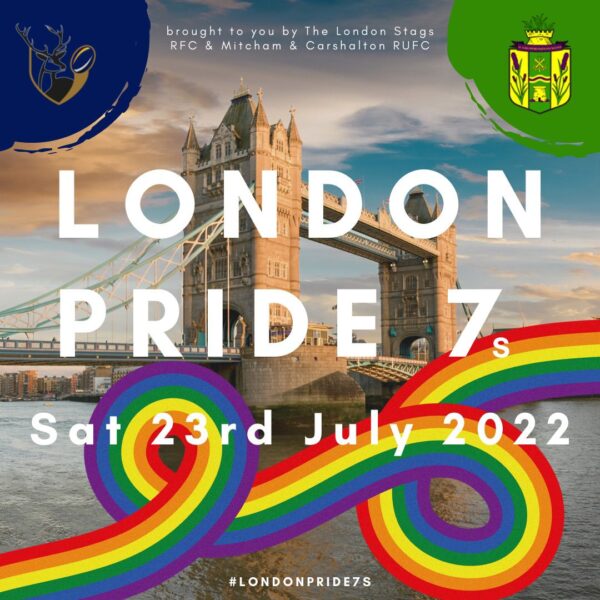 This year, Gallagher Premiership referee and champion of inclusive rugby, Craig Maxwell Keys, has been confirmed to attend as the guest of honour. He stated: “I’m delighted to be attending the London Pride 7s and celebrating all that’s positive about being inclusive. Inclusive sport is essential and at the same time highlights to others the missed benefits where we aren’t as inclusive as we should be.”

London Pride 7s was launched in June 2021 and saw 12 clubs, mostly from the IGR (International Gay Rugby), field 18 sides in a day-long tournament in sunny South London. Alongside the hosts who fielded sides, clubs in attendance included the Kings Cross Steelers, Wessex Wyverns, Brighton & Hove Sea Serpents and the Worcester Saxons to name but a few. A number of these have already confirmed attendance with more to be confirmed in the coming weeks.

Josh Jones, 21/22 Club Chairman of the London Stags was thrilled to confirm the news. “We’re delighted to be hosting our Pride 7s tournament with our partner club, Mitcham & Carshalton for a second year.

“Despite last year Covid slightly impacting the day, it provided a great opportunity for IGR teams to enjoy a fantastic day of rugby and to meet their counterparts.

“Rugby has always had a strong ethos of inclusivity, but we know there’s still a way to go and we hope tournaments like this help ensure that rugby truly us a game for all.”

Ian McAra, Mitcham & Carshalton Chairman, added “We were immensely proud to be able to host London Pride 7s alongside our friends The London Stags last year and we can’t wait to be kicking off again this Summer.

“The feedback we received from the other clubs was overwhelming and we’re delighted to be part of an event that celebrates inclusivity within the sport we love.”

For more information on the London Stags, CLICK HERE