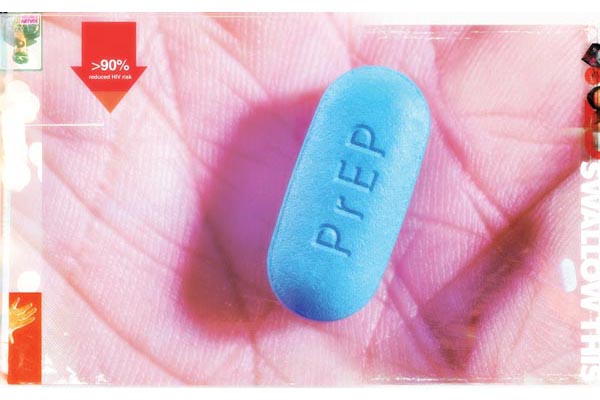 Eric Page looks at how PrEP can reduce the chance of infection of HIV, the stigma around using it and finds out from four men how it has affected their lives and the sex they have.

PrEP, short for pre-exposure prophylaxis, is two different medications that can substantially reduce the chance of infection by HIV for those at increased risk, including men who have sex with men (MSM).

It needs to be taken as prescribed, although this isn’t always everyday. (Most) men don’t just get a prescription but are part of a routine of regular clinic attendance and testing as part of getting the drug.

New HIV infection stats show it’s a game changer but there’s still an astonishing amount of stigma, confusion and prejudice about why and how men are using it.

Here we talk to four very different men about how PrEP has affected their lives and the sex they have. Many men asked wouldn’t talk openly about being on PrEP although they’re happy to state on Grindr and Scruff that they use it, alongside their clear face pictures. Some of the men have asked to remain anonymous as they’re concerned about being ‘slut shamed’ by other gay men. Envy is a map, perhaps it’s time we stopped judging and listened to lived, informed experience.

Game changer or not, people have strong views on PrEP that are not always good and that’s stopping us from having an honest and open conversation about its impact on us as a community of MSM and embracing this new sexual revolution.

Chris (47)
“I don’t like the way some guys on PrEP think it’s a free ticket to have whatever sex they want and to treat guys with disrespect.”

I don’t take PrEP but I know the pros and cons. PrEP hasn’t changed the sex I have. I respect a guy’s choice to protect himself however he wants to, PrEP, condoms, both are good.

I’ve always been pretty up to date and conscious of my sexual health, my generation of gay men usually are. I don’t like the way some guys on PrEP think it’s a free ticket to have whatever sex they want and to treat guys with disrespect.

We should continue to educate teenagers in school about the benefits of a loving, caring and respectful relationship, and that sex isn’t about self-gratification, but there are consequences both physically and emotionally when we get involved intimately with another person. PrEP is now part of that ongoing healthy education.

JAMM (38)
“Prevention costs a fraction of treatment and the NHS needs to step up and provide PrEP if it wants to reduce the amount of money it spends on HIV care.”

PrEP liberates me from the fear of getting HIV and dying of AIDS. That may sound dramatic, but at the core of it that’s why I take PrEP. Obviously, HIV treatment has come a long way but I’d rather remain HIV-negative. As anyone on treatment will tell you, it’s no walk in the park.

Being on PrEP means I don’t need to know a partner’s status, I’m protected. A person’s status is nobody’s business but their own. Some people are more comfortable to disclose, others are not. Being on PrEP negates all of this and helps end the stigma around HIV.

I’ve always enjoyed healthy, varied sex and I’m certainly not shy of the feeling of liberation that comes from getting exactly the great sex that I want.

The use of condoms is always an option, however as the Proud Study in the UK found out, the number of STDs reported did not change when people on PrEP stopped using condoms. That was also the case for me. This may sound surprising but that’s what medical studies are for. Occasionally I come across people who think PrEP is just an excuse to throw your condoms out and behave irresponsibly.

If you think through the cost of HIV care and treatment to the NHS, taking PrEP is a hugely responsible thing to do. Prevention costs a fraction of treatment and the NHS needs to step up and provide PrEP if it wants to reduce the amount of money it spends on HIV care. Also, sex without a condom just feels better to me. What’s wrong with being able to embrace that responsibly, making sex more enjoyable for everybody?

The current protocol for taking PrEP requires an HIV test, check up and STD screen every three months. This has made me conscious and in control of my health. In Brighton & Hove we’re incredibly lucky to have very good sexual health services.

There are a couple of fairly mild side-effects, the most interesting of which are very vivid dreams. I quite enjoy them but they’re pretty rare and usually go after a few days.

PrEP will not change sex in the future. Sex has never really changed and probably never will. The idea of putting this or that in there for pleasure is one of mankind’s most wonderful discoveries. How we react and protect ourselves from the various viruses nature throws at us will always continue to change. There’s a simple, cheap to manufacture drug that will stop you from ever getting HIV. Why would anybody not want that?

I’m not on PrEP. Yet! But I feel a sense of liberation when it comes to unprotected sex. I feel that if the guy I’m having sex with has taken PrEP, it shows me that they are taking care of their sexual health and that makes me feel that sex with someone taking PrEP would be safer, due to eliminating the risk of HIV transmission. But I’d need to know them, not only rely on them telling me they take PrEP.

The sex I have has always been intimate, I’m just that type of person. It seems like PrEP has taken away the need to use condoms. Not having to fiddle around with a lump of latex seems sexier. I still worry about syphilis, chlamydia and gonorrhoea. PrEP has affected me because I now need to spend more time negotiating condom usage when having sex with a person I don’t know. In the past I’ve left a person’s house because they wanted bareback sex and my need for condom usage. The quantity of sex I get has decreased. There’s been a huge shift away from condom usage and I only engage in unprotected sex when I know the person and I’m 100% sure they’re taking PrEP.

People aren’t using PrEP alongside condoms, they’re buying it online and taking it with no medical advice or intervention. It’s changed the way people view unprotected sex; I guess some guys are putting themselves at risk of other STDs.

PrEP gives guys an added level of protection and is continuing to drive down transmission of HIV in the UK. It’s a wonder medication and will help us see the end of HIV transmission, if used correctly and consistently.

I’m hoping that PrEP will support the end of HIV infections and end the HIV epidemic. In terms of sex, it will support people who suffer with HIV anxiety. For those who engage in unprotected sex it will mean that they no longer need to worry. It’s a must for the NHS and HIV Prevention England to ensure that PrEP is widely accessed in the UK.

Male (FTM) (25)
“I like being a cum-dump, that’s the point for me, ‘safer sex’ has always been a dull option. Sex should be wild, unsafe and free. I want loads, on my terms”.

God yes, PrEP rids me of fear. Fear of slipping up; fear of waking up Monday and  worrying all week; fear of not f**king the hot guys; fear of being rejected; fear of stigma (I’ve already got enough of that); fear of not having the kind of sex I want; fear of being judged. Most gay men judge like f**k over my uninhibited sexual behaviour, lots of blame and jealousy out there still.

Intimacy in sex is overrated. I like hard random anonymous sex, it’s what gets me off and what I seek, so these pills haven’t changed the feeling of physical connection I’m getting with my f**ks. I get there quicker.

Since PrEP, there’s been a big increase in men who’ll have sex with me, who are happy to BB and do raw, and that means there’s more choice, more variety and a much younger group of men who’re not so obsessed with HIV infection and have it in proportion. It’s good to be getting past the AIDS hysteria of the last few decades. The amount of sex has increased, certainly more opportunity for me to f**k with more men. I’m more empowered as bottom now, tops had all the power in sex, PrEP will destroy the tyranny of tops.

I screen condom freaks out, never liked them. I have a latex intolerance that never helped. Lots of guys don’t even know how to use them properly. I like being a cum-dump, that’s the point for me, ‘safer sex’ has always been a dull option. Sex should be wild, unsafe and free. I want loads, on my terms.

Being trans (FTM) has kept me pretty mindful of my sexual health, it’s the ones who think they are negative, never test, never have, lie and cheat, live in cloud cuckoo-land about their behaviour who need to be more conscious. Not me.

I can’t see how anything is negative about a drug that protects you from infections, doesn’t seem to have too many side effects. Friends complain about having to buy them online, that’s also an issue for me, I can’t get them any other way. Not knowing if they’re genuine etc, but with hormones, chems, Viagra, steroids etc, who knows what they’re actually taking? Some of my mates are taking PrEP just on the weekend when they’re at (chemsex) parties and sessions. It’s changing the way they act and feel, their mental health and stress is better as they worry much less. They haven’t had more STDs that I’ve heard.

PrEP has led to a proper conversation about sex and risk rather than the shrill shrieking Marys of the Safer Sex crusade. It’ll lead to a serious shake up of the way men who f**k raw with men are treated and give them options and choices in the way contraception pills did for women in the 1960s. In a few years the fear mongers will be gone, new HIV infections will be dropping right down and PrEP will be like the Pill has become; a fact of sexually active life, nothing more touchy, and just be a daily proactive commitment to maintaining your sexual/physical health. Eat, gym, PrEP, f**k, sleep – easy.

I don’t think PrEP will change sex. Arouse is arouse is arouse, and there’s nothing new under the sun. Sex has always been and will always be the same; we’re human after all, now shut up and f**k.