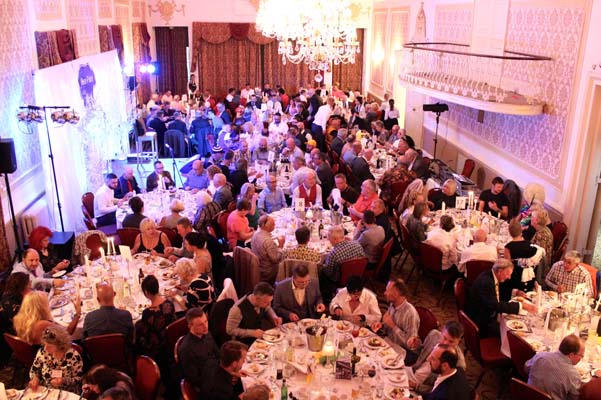 Hibernation 2018, the annual Community Luncheon organised by Danny Dwyer and Bear-Patrol broke all previous records, raising an amazing £15,568.00 for MindOut and The Rainbow Fund.

HIBERNATION, now firmly established as one of the city’s premier LGBT+ community events, took place on Sunday, October 21 in the Paganini Ballroom at the Old Ship Hotel on Brighton seafront.

Over two hundred of Brighton’s finest were welcomed by the Mayor of Brighton & Hove, Cllr Dee Simson. The High Sheriff of West Sussex, Caroline Nicholls DL was also in attendance.

£5,000 will be donated to MindOut the LGBT mental health service as Bear-Patrol’s continued commitment and support for their Counselling Project and £10,568.00 will be donated to the Rainbow Fund to distribute to LGBT+/HIV organisations providing effective front line services to LGBT+ people in Brighton and Hove.

Entertainers included Krissie Ducann, Dave the Bear, whose spectacular Jessica Rabbit and Leather Daddy routine went down a treat, Rob ‘The Voice’ Stevens who performed showstoppers from the musicals and duetted with Jennie Castell in his Meatloaf set and David Raven whose beautiful rendition of Over the Rainbow opened the show and set the tone for the afternoons entertainment.

Jennie Castell ably assisted by Graeme Atack excelled as auctioneer with her efforts alone generating £7,010.00 towards the final total raised.

Toastmaster Dan Rennie-Hale brought an element of order and decorum to the proceedings as did the new General Manager at the Old Ship Hotel, Jason Bramwell whose help and support ensure the event happens in such wonderful surroundings.

Star item in the auction, was an original piece of pop art of Freddie Mercury painted especially for Hibernation by local artist Lez Ingham. It raised £2,700 which along with the £3,300 raised from the auction of her painting of George Michael at last years Hibernation, brings the total donated by Lez to Hibernation in the last two years to £6,000. Well done Lez!

Brighton cross-stitch enthusiast Robert Flint’s remarkable embroidered portrait of fifteen renowned drag stars, raised a fantastic £1,300. The drag artiste project took Robert seven months to complete, with each individual portrait of 6,400 stitches taking three and a half weeks making an astonishing 96,000 stitches in all and about 2,160 hours spent sewing.

Chris Gull, Chair of the Rainbow Fund, said: “Congratulations to Danny and Bear Patrol on the success of this year’s Hibernation event. Our thanks, on behalf of the 22 local LGBT+ and HIV projects which The Rainbow Fund is supporting with grants this year, also go to those who attended and donated, bought raffle tickets, and bid in the auctions, and of course to those who donated, and created, the fabulous prizes and auction items. Hundreds of people in our LGBT+ and HIV communities will benefit from your generosity.”

Danny Dwyer from Bear Patrol, added: “From what started as a small luncheon at the Malmaison (then hotel Seattle) in 2011, Hibernation has become one of the most sought after Community luncheons in the LGBT + calendar and it really is an absolute pleasure to create and put on for people to attend and get involved with. This years total has far exceeded expectations raising an amazing amount of funding which will be distributed back into the community and I’m already looking forward to putting together next years event. We are keeping the line up under wraps and tickets are already selling fast ! Get in quick so as not to miss out on this wonderful day.”

Helen Jones, CEO MindOut said: “The Hibernation Luncheon is a fantastic fundraiser for the MindOut counselling service, we really could not survive without this support.  Danny and his team are brilliant fundraisers!  Its wonderful to see so many people having such a good time as well as raising money for vital community run services.  This is the LGBT+ communities maximising its resources and using them for the good of all of us.  I’d also like to say a big thank you to the people who donated items for the auction: the art work was stunning, really beautiful and so generous of those artists.”

The last Hibernation in 2017 raised £9,193.04 for MindOut and the Brighton and Hove LGBT Community Safety Forum.

Hibernation 2019 will take place on Sunday, October 20. To secure a place email: info@bearpatrol.org.uk