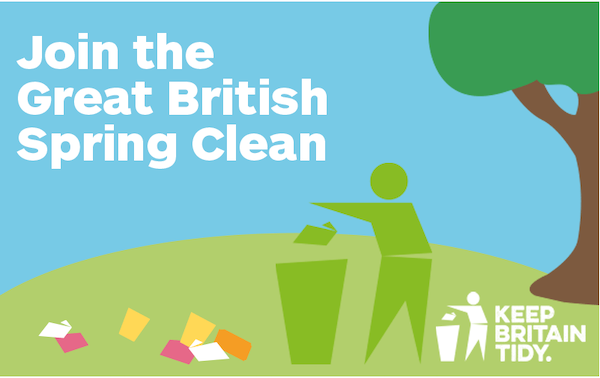 Brighton & Hove City Council (BHCC) has announced it is taking part in Keep Brighton & Hove Tidy during Keep Britain Tidy’s annual event, the Great British Spring Clean, which takes place between March 25 and April 10 and is an opportunity to get our city spick-and-span.

During this year’s Great British Spring Clean, BHCC is calling on everyone in Brighton & Hove to harness the power of collective environmental action by taking on the #BigBagChallenge, which is open to all. So whether you’re a small or large business, an organisation, a charity, a school or a resident, BHCC is hoping everyone will join in!

If you’re a business looking to get involved, email communitycleanup@brighton-hove.gov.uk to register your interest and let BHCC know where you’ll be undertaking your spring clean.

To kick off the Great British Spring Clean, BHCC is hosting an opening family event in partnership with Friends of Preston Park from 11am to 2pm on Saturday, March 26 in the Preston Park Rock Garden.

As well as the rock painting activities, tools and equipment will be available to do a litter pick in the Rock Garden or Preston Park.

There’s need to book – just go along on the day with a big, smile and some artistic ideas. The theme for decorating the rocks is Litter & the Environment. Once decorated, the stone can be hidden in the Rock Garden or Preston Park for others to find and pass on.

Rocks and painting materials will be provided free, the only thing you need is your imagination.

Cllr Phelim Mac Cafferty, Leader of BHCC, said: “We all share a responsibility as a city to keep the place we love tidy. And events such as Keep Brighton & Hove Tidy from March 25 to April 10 provide a timely opportunity for everyone to get involved.

“Once again, we’re bringing businesses, residents, community groups and council teams together to celebrate our city with a sense of pride and community spirit.

“City Clean staff will be working in high footfall areas through the night jet washing, removing tagging and stickers. We’re also appealing to you, our city’s communities, to get involved too. You can join an organised event in your area, connect with our Tidy-Up Team or local community groups which organise regular litter picks.

“We know the cleanliness of our city matters, not just to residents and visitors but also to our environment. We all share one city and one planet. Let’s work together to play our part to keep our city tidy.”

BHCC is particularly encouraging residents and businesses to focus their efforts on their doorsteps where activities like weeding, litter picking, graffiti removal and de-stickering can be completed easily and at a time that suits you!

The final day of the Keep Britain Tidy, Great British Spring Clean, is the same day as Brighton Marathon and the Tidy Up Team volunteers will be on hand to help with collecting the litter around water stations.

Working with the organisers of the Brighton Marathon, BHCC is hoping that with all the the Tidy-Up Team volunteers dotted around the course, they’ll be able to provide a huge help in reducing the amount of rubbish that is dropped around these areas.

As well as encouraging residents and businesses to conduct a litter pick in their area of choice, BHCC’s City Clean team will be carrying out overnight cleaning throughout the city; jet washing and de-stickering street furniture, as well as removing graffiti from public property.

Keep an eye on BHCC’s social media for updates of the clean-ups during the Great British Spring Clean.