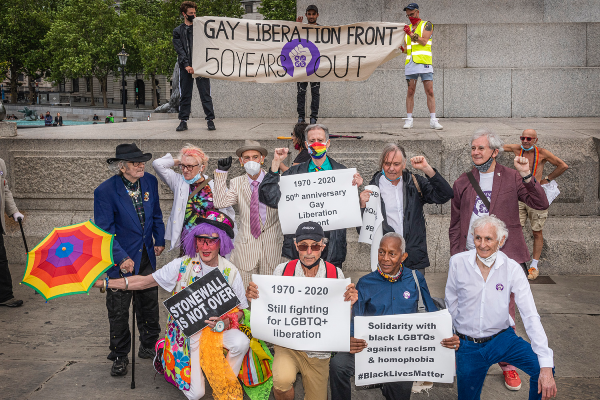 Twelve of the last surviving activists from the London Gay Liberation Front (GLF), 1970-74, some in their 70s and 80s, marched in London on Saturday, June 27 to celebrate the 50th anniversary of GLF and to reclaim Pride with political demands.

This year’s Pride in London parade on Saturday, June 27 had been cancelled because of the coronavirus pandemic. But the GLF veterans marched anyway, on the same day, along the same route, that the official Pride parade was due to follow.

The march was coordinated by Peter Tatchell who was an activist in GLF, which was formed in 1970 and ignited the modern LGBTQ+ protest movement in the UK.

The veterans and 40 supporters each wore face masks and observed social distancing. They began outside the BBC and followed the planned official Pride route down Regent Street, Piccadilly Circus and Haymarket to Trafalgar Square, where there were speeches from GLF veterans.

Putting politics back into Pride, the five demands of the GLF Pride march were:

The GLF march coordinator, Peter Tatchell, 68, was one of about 40 people who helped organise the UK’s first Pride march in London in 1972. He has attended every Pride London parade since then. This was his 49th.

Some of the GLF veterans on the march commented:

Ted Brown, aged 70, said: ‘GLF stemmed out of Stonewall 1969, which was a riot that took place after centuries of oppression against LGBT+ people. We proved that the authorities will not listen unless we fight back, make a noise and cause a disturbance, as Black Lives Matter is doing now.’

Nettie Pollard, 70, said: ‘Fifty years ago, the GLF said come out, change ourselves and revolutionise the world. Joining with other oppressed groups is the only way to work toward real change. Rights can so easily be taken away again. Liberation must mean freedom, including sexual freedom, for everyone. At Pride 2020, GLF still believes in revolution.’

Andrew Lumsden, 78, said: ‘We insist on gathering in plain sight every year because for 2,000 years we were told to be invisible. This is the 50th calendar year in which we’ve walked the walk in London. We who were there in 1971 and 1972 walk now on behalf of our contemporaries who are too unwell, locked-down or far away, to join us. Many have already gone to LGBT+ heaven. And we walk in honour of the young who are fighting in every country around the world. We think of LGBTs in Hong Kong, Poland, Chechnya, Brazil and Indonesia, who seek the dignities that ought not be denied to anyone.’

Stuart Feather, 80, said: ‘Gay Liberation was the cosmic big bang beneath heterosexual and gay society with its call to come out – be visible – break the taboo. From revolutionary chaos emerged two driving issues: misogyny and feminism. And two questions: what does it mean to be lesbian or gay, and how do we liberate ourselves? Based on the English revolution and the Quaker idea that ‘my word is my bond’, LGBT+ liberation will be the work of generations before there is general acceptance that without harm to others, my sexuality, my chosen gender, is my bond with society and no-one’s business but mine own.’

John Lloyd, 67, said: ‘From the outset, GLF had an internationalist perspective. In 1973, Peter and myself represented GLF at the World Youth Festival in communist East Berlin, which was attended by over 100,000 young people from all over the world. We spoke out for gay liberation and staged LGBT+ protests. Despite being attacked by members of our own British delegation, our interventions for the first time put LGBT+ rights on the agenda of the left, social democratic, liberal and trade union movements in the UK and other countries.’

Peter Tatchell, 68, said: ‘GLF did not seek equal rights within a flawed, unjust status quo. It campaigned for the transformation of society to end straight supremacism and stood in solidarity with all other oppressed people. A similar agenda of radical social change is needed now, as the UK faces the threats of Covid-19, economic meltdown, institutional racism, climate destruction and the demonisation of trans people. We support Black Lives Matter and the just demands of black communities and black LGBT+ people, like we did in the early 1970s.’

The march expressed its solidarity with LGBTQ+ people in the UK and worldwide. Oppression for none. Liberation for