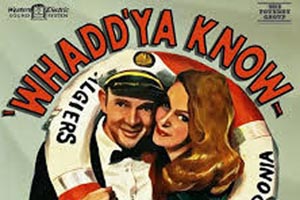 If you need an antidote to world politics and Brexit, then slip back in time to the era of Hope, Crosby and the Marx Brothers and join the ocean liner Freedonia with its motley trio of musicians Joey, Lenny and Mikey – who are not at all what they pretend to be.

ADD in the diva Sam, who may be a stowaway but maybe not and you have an hour-long musical romp with period style songs, jolly and silly lyrics, sharp-shooting dialogue and an impossible happy ending.

The four principals, who all play musical instruments, share a variety of roles and David Mountfield excels as the Fatty Arbuckle look-alike really stupid drummer Mikeyone minute and the next he is the ferocious First Officer who sings a wonderful tirade about hating music – “when I see a deaf guy I wish it was me.”

Glen Richardson who plays a great piano is also hilarious as the unbelievably rich and lovelorn Prince Frederico XIII, in a terrible wig and even worse wayward moustache. The prince saves the bacon of the fake musicians and sets them up for life. It’s that kind of barmy plot.

The songs by Jerry Ruff, who plays the guitar-playing love interest in the show, are all clever parodies with a sharp sarcastic edge. Amy Sutton as the sultry singing siren is terrific in her delivery and though she plays the field we know she will end up with the right man, even though he avows that he wants Sam to give up her singing career and become his property .

As one character says: “Hank’s my stage name; my real name is Nelson but you can call me Joey.”

If that kind of silliness is up your street, this is a show not to be missed. A real treat.