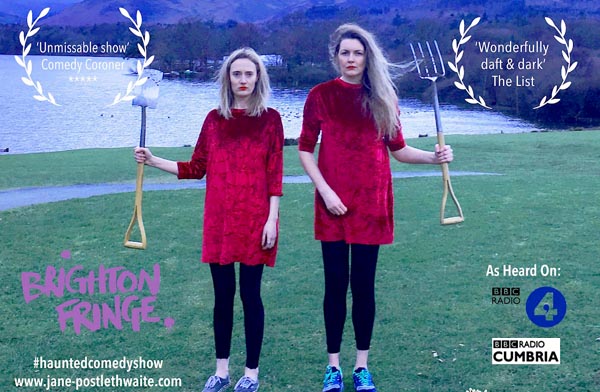 Multi-comedy award finalist Jane Postlethwaite (Made in Cumbria and Last Night at the Circus) teams up with fellow Cumbrian comedian Steph Bradshaw to invite you to a deliciously dark new comedy sketch show.

JANE is a Funny Women Awards and Brighton Comedy Festival Squawker Award finalist. Her first character show Made in Cumbria had a sold out Brighton Fringe run with Lamb Comedy Productions. It was nominated for two Brighton Fringe awards – the Latest Comedy Award and for the Audience Choice Award.

Her multimedia character comedy show for 2017, The House debuted at Brighton and was taken to Edinburgh Fringe throughout August with Sweet Venues.

Her show, Last Night at the Circus touched on mental health and focuses on getting conversations going about depression, anxiety and suicide.

She’s been heard on the Radio 4 comedy drama, Almost like being in love written by Catriona Knox and produced by Caroline Raphael. Her characters have also featured on the BBC Radio 4 show Jo Neary’s Inbox. In 2018 her stand up got her into the BBC New Comedy Award Heats.

Steph is a fledgling stand up comedian and actor who has starred in numerous musical theatre productions in the North West. She was recently the lead role in The Addams Family Musical.

Jane and Steph have co-hosted the Miraculous Cumbria comedy podcast since June 2018 and have been heard on BBC Radio Cumbria when they co-hosted the Friday Showcase show.

They’re now thrilled to be bringing their wonderfully dark, daft, surreal humour to the Brighton Fringe with this new show. The show is set in a haunted theatre with themes of the paranormal, feminism, space travel, magic, stand up comedy and the really mundane. Expect to leave less dead inside.