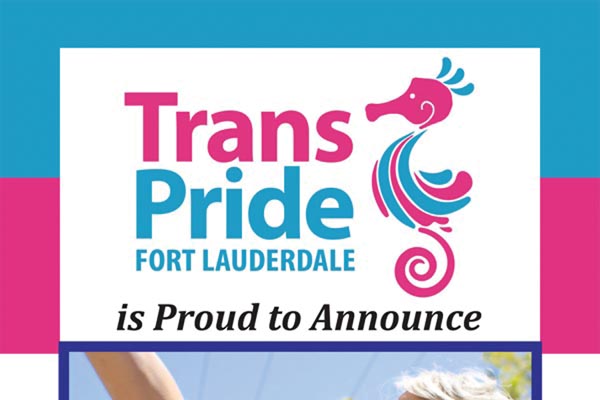 Miss Major Griffin-Gracy to be the honoured guest at Trans Pride and Pride Fort Lauderdale on February 24, 2019.

Trans Pride and Pride Fort Lauderdale will be honouring Miss Major Griffin-Gracy, a Transgender customer at the Stonewall Inn in New York City on the night of the 1969 police raid that sparked the Stonewall Riots (she was knocked unconscious and arrested in the raid) and the birth of the modern LGBT+ rights movement. Since then, Miss Major has been a tireless advocate for the Trans communities. As the 50th anniversary of that event approaches, Trans Pride and Pride Fort Lauderdale are proud to introduce this pioneer to new generations of LGBT+ people who live in a very different world in 2019.
South Florida (Fort Lauderdale/Miami-Dade) has one of the largest Transgender communities in the country, although it might not be noticeable because many Trans people are ‘stealth’ in their public and professional lives. As a result, there is also a concentration of surgeons, health care and service providers who serve the Trans communities in the area.
Last year, at the suggestion of TransSocial, one of the most active Transgender support organisations, Pride Fort Lauderdale included a Trans Pride section as part of their larger festival. Those businesses, social service agencies and others who serve the communities were provided with a dedicated area to exhibit, internationally-recognised Trans entertainers were showcased and profits from beverage sales in that area were returned to the trans communities in the form of grants.
This year, Trans Pride Fort Lauderdale continues to grow within the main four-day Pride festival. A Trans steering committee is planning activities, engaging businesses and sponsors and promoting the event to the Trans communities all over the country.
For more information about Fort Lauderdale and Trans Pride, click here:
For more information about what Fort Lauderdale offers the LGBT+ traveller, click here: