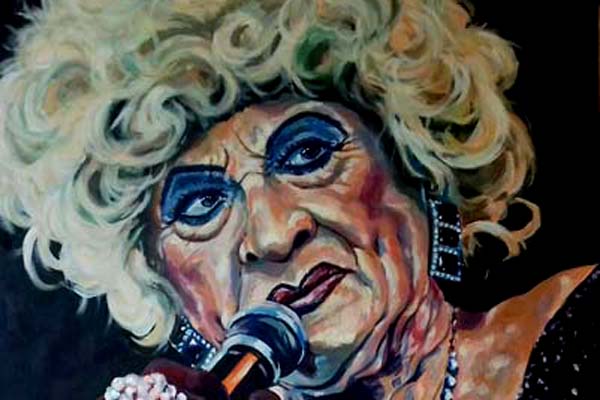 Brian Butler chats to up and coming artist Ian Brown about bears, drag queens and the homeless.

IAN Brown had always been interested in art, but when he became a Primary School Head at a relatively young age, he admits he just didn’t have the time to paint.

When injury gave him time off work, he turned to painting again as a form of therapy.

Just over 2 years ago, after turning to part-time teaching, Ian moved to Brighton, finding more of a market for his particular style of portraits which often emphasises the bear and leather world.

“I need to find what is the Ian Brown style,” he said at his basement studio under his Brighton home. “I’ve moved from realism, more towards pop-orientated, street art,” he says.

He finds that drawings sell more easily than paintings and his work has gone to the USA, Russia and Australia.

His parents never regarded art as a proper job, but when his work started to be recognised, he says they rethought their values, “especially when I came out”, he admits.

One of his latest projects is to explore the essence of drag queens on canvas. He’s already painted Maisie Trollette and Mary Mac and has others planned for a future exhibition. He aims to complete about 10 , depicting both drag queens and kings over the next year.

Then he plans to turn his attention to homeless people living on Brighton’s streets. It’s an ambitious work programme for one of Brighton’s still-developing artists.

Ian’s work can be seen on Facebook at Ianbrownstudios.

Enquiries about sales or commissions to: ib1966@aol.com