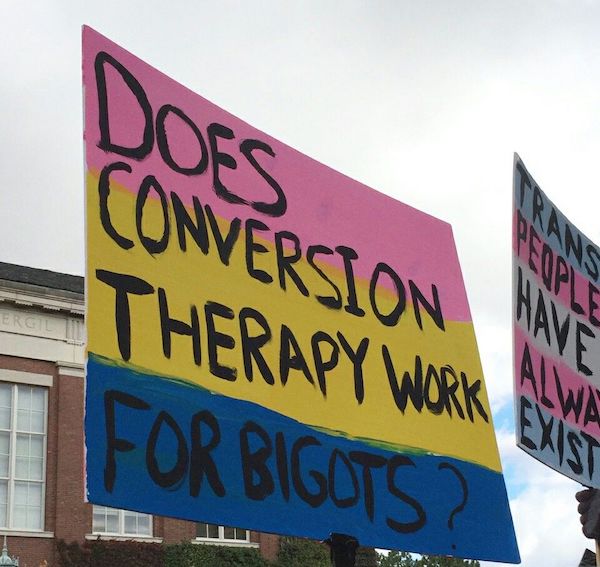 Summarising the evidence, the Committee today recommends that new legislation is brought forward “promptly” to comprehensively ban the practice in all its forms. End Conversion Therapy Scotland have called this “a welcome and vital step towards ending the abuse and torture of LGBTQ+ people in Scotland”.

Survivors of conversion practices and a number of leading LGBTQ+ organisations – LGBT Youth Scotland, Stonewall Scotland, Equality Network and Scottish Trans – were among those invited to give evidence and have also welcomed the Committee’s recommendations for swift action.

Dr Rebecca Crowther, Policy Coordinator at Equality Network says: “We are delighted to see the recommendations made by the Committee and look forward to the next stages, ensuring that these harmful practices are finally put to an end across Scotland.

“It is thanks to the testimony of survivors of these abhorrent practices that the Committee has made these recommendations – We want to thank them for standing up and sharing their stories so that these practices could finally be stopped.”

Megan Snedden, Policy and Campaigns Manager at Stonewall Scotland says: “A fully comprehensive ban on conversion practices is necessary to protect LGBTQ+ communities in Scotland from harm. That’s why we welcome that the Committee’s report makes clear that a ban must cover sexual orientation and gender identity, both adults and children, all settings, and with no exceptions for so-called ‘consensual’ practices.

“We’ll continue to work with MSPs and the Scottish Government to ensure that Scotland delivers a comprehensive ban on conversion practices in the most effective manner and without delay.”

‘Conversion therapy’ is the misleading name for practices and directive behaviour intended to change or suppress someone’s sexual orientation or gender identity. Conversion practices are based on the misconception that these can be changed and on phobic beliefs that being LGBTQ+ is wrong or in need of being ‘fixed.’ There is nothing therapeutic about them. The Committee heard from a number of survivors of conversion practices that had taken place in Scotland.

When giving evidence before the Committee, Blair Anderson of End Conversion Therapy Scotland, who is a gay man who was put through conversion practices as a child, said: “Conversion ‘therapy’ is not a positive, therapeutic or beneficial treatment. It is often seen as a form of torture. The International Rehabilitation for Torture Victims said that conversion ‘therapy’ violates the global ban on torture.

“People cannot consent to torture. It is not possible to change your sexuality or your gender identity. Conversion ‘therapy’ cannot work. We consider conversion practices to be a form of torture and it does not work.” Source.

Sophie Duncan of End Conversion Therapy Scotland, added: “We are grateful to the Committee for setting out so clearly the case for a comprehensive and swift ban on the torture of LGBTQ+ people in Scotland.

“We have been clear from the outset of our campaign: any conversion practices ban must be fully comprehensive, protecting all of Scotland’s queer people from conversion practices, in all its forms. We are glad that the Committee has resisted efforts from those who practice, or who support these practices, to muddy the waters of this debate.

“It is positive to see the Committee note their concern regarding how long it has taken to reach this point – and we fully back their calls for the Scottish Government to work with Holyrood to ensure legislation is brought forward as soon as possible.”

“We look forward to seeing the day when all LGBTQ+ people are allowed to be who they are, free from hate or persecution, and we hope that day is soon.”