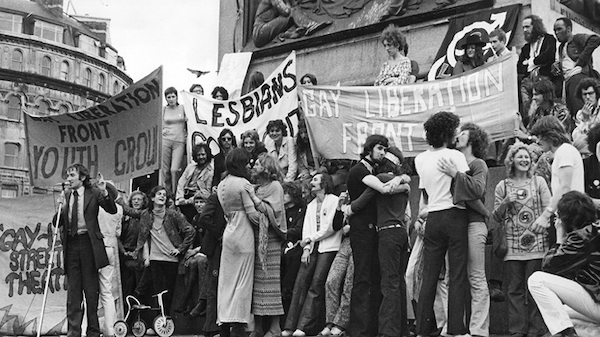 Both will be led by Gay Liberation Front (GLF) veterans who organised and marched in the first Pride in 1972.

On Friday, July 1 assemble at 1pm on the steps of St Martins-in-the-Field church, Trafalgar Square.

This march is organised by veterans from 1972 and will retrace the exact route of 50 years ago: Charing Cross Road and Oxford Street to Hyde Park.

“This 1972 veterans-led Pride march gets back to the roots of Pride, being both a celebration and a protest for LGBTQ+ rights, with demands for LGBTQ+ liberation in the UK and worldwide,” said human rights activist Peter Tatchell who was one of about 30 GLF activists who organised the first UK Pride and he has marched in every Pride London parade since. This will be his 51st Pride march in London.

“Pride in London has become depoliticised and commercialised. The veterans march has no corporate sponsors and no police, arms manufacturers or fossil fuel companies. The Home Office and airlines that facilitate the deportation of LGBTQ+ refugees are not welcome and will not participate. We will put LGBTQ+ human rights centre stage.

“Unlike the official Pride in London, there is no limit on the number of people allowed to march. No one has to register, pay a fee or get a wristband. Just turn up. We are holding a commemorative Pride march for the LGBTQ+ community – totally open, egalitarian, grassroots and human rights-focussed. It mirrors the informality and spontaneity of the first Pride march in 1972,” said Mr Tatchell.

On Saturday, July 2 assemble at 11am for a 12pm departure at the head of the parade in Park Lane near Hyde Park Corner tube station.

“This is the official corporate-backed Pride in London march, supported by the Mayor of London, where they restrict the numbers to 30,000 marchers and turn away thousands of marchers every year.

“Most of us veterans have strong criticisms of the Pride in London organisers. But we believe that on this 50th anniversary of Pride it is important to have GLF and 1972 Pride veterans head the parade.

“We are being given the lead spot, both in the parade and onstage in Trafalgar Square after the march,” added Mr Tatchell.