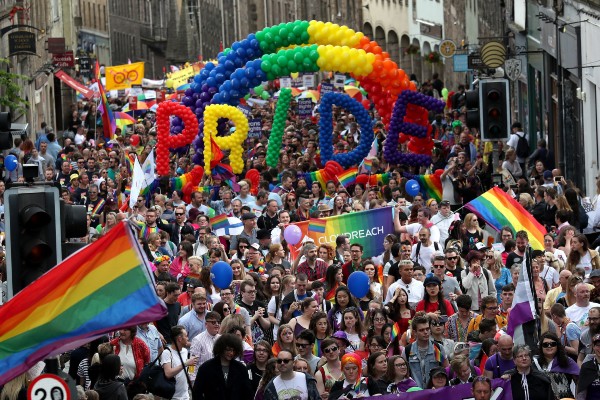 Edinburgh’s annual LGBTQ+ Pride festival has been cancelled for the second year in a row due to the ongoing coronavirus pandemic. According to Edinburgh Evening News, the official Pride group said after discussions with the city council and national government, it came to the conclusion that it would be unsafe to go forward with the event, which has been running for over 25 years.

Pride Edinburgh announced the news on Twitter: “It is with sadness and heavy hearts that we announce the cancellation of Pride Edinburgh’s event in 2021. We thank all our partners and sponsors and most of all the LGBTQ+ community of Edinburgh, Scotland and beyond, we know the Rainbow will always shine in our capital city.” However, the group hopes that the festival will be able to return in 2022.

The festival is the first large summer LGBTQ+ Pride event to have been officially cancelled this year, after many were hopeful 2021 would see Pride return to the UK. In place of the physical festival, Pride Edinburgh is hosting a handful of virtual events which it will release more information about shortly.

A handful of social media users expressed disappointment at the cancellation of Edinburgh Pride, but agreed it was unsafe for the festival to go ahead, with one person tweeting: “Such a shame but the right decision in the circumstances. Pride will be back next year. Until then Edinburgh. Stay safe.” Scottish Adoption, which frequently marches in the parade, tweeted: “This is such sad news that another year has to be cancelled. We can’t wait to be able to join everyone when you are able once again to come together and celebrate Pride in the City of Edinburgh! As you say, the Rainbow will always shine in our capital city!”