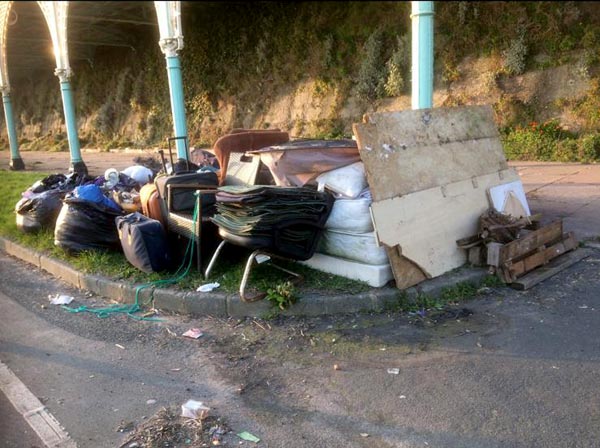 Council ropes in specialists to remove rubbish from Madeira Terrace.

A TEAM of specialist abseiling cleaners have removed a huge pile of rubbish from Madeira Terrace.

The city council called in Brighton based company Sussex Rope Access to clean up the Terrace’s mid-level as pedestrian access onto the raised walkway has been deemed unsafe by structural engineers.

Despite the area being fenced off, rough sleepers climbed over the barriers to set up camps. When they moved on, they left dangerous needles and other drug paraphernalia, plus mattresses, sleeping bags, bedding, supermarket trollies and other rubbish.

Rachel Chasseaud, the council’s assistant director of City Environment, said: “Our structural engineers have told us that the mid-level of Madeira Terrace is very dangerous for people to walk on or have machinery on as it could collapse.

“We fenced the area off to make clear no one was allowed, so it was a real concern that rough sleepers had set up camp and then left piles of rubbish.

“Some people walking on Marina Parade above the terrace walkway had also tossed rubbish into the fenced off area. It was too dangerous for our staff to work on the walkway, so we called in Sussex Rope Access who are professionals in getting into difficult areas by abseiling.”

The specialist team removed the waste from the mid-level and transferred it to ground level where Cityclean staff waited with a truck to take the rubbish away. The process will now be repeated on an ‘as and when’ basis until the area can be made safe.

Rachel added: “Everyone has done a brilliant job and removed a lot of dangerous items like drug needles and other potentially harmful items.

“Committed volunteers had contacted us to say they were prepared to go in and remove the waste, but as a responsible local authority, we couldn’t allow any member of the public to put themselves in danger.”