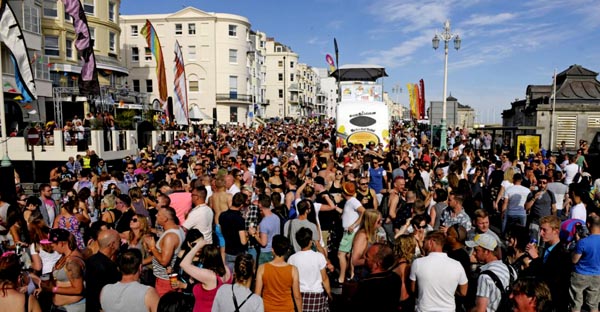 BRIGHTON Pride, the busiest weekend of the year for the council’s refuse, recycling and street cleaners, attracted many thousands more visitors to the city centre than in recent years.

The large number of visitors arriving for both Pride and to enjoy a hot summer weekend led to huge crowds across the city, especially on the seafront, staying late into the night.

It is not possible to effectively clear litter in the middle of crowds so the cleaning teams were only able to move into action once people started to disperse.

Advanced planning for the event meant that Cityclean was well resourced to keep the city clean over Pride weekend. Staff were employed to work shifts day and night over the weekend, with the first shift starting at 5am on Saturday and the last shift ending at around 3am on Monday morning.

Staff worked throughout the night on Saturday (5) to clean the area around Preston Park and St James Street and cleared most of the rest of the city during the Pride weekend.

Additional rubbish bins were installed along the route of the Pride Parade and at the seafront and collected early on Monday morning. More than 100 metric tonnes was collected during this time, that’s the equivalent of 10 fully compacted refuse lorries of rubbish or more than 10,000 full binbags. That’s the equivalent amount of rubbish that the council normally collects in one day from across the entire city.

Two additional larger scarab sweeping machines were delivered to the council free of charge by Scarab Sweepers Ltd and used to support the clean up throughout the weekend.

The Pride clean-up operation finished with jet washing of streets and pavements at St James Street on Monday morning (6).

Chair of the Environment, Transport and Sustainability Committee, Councillor Gill Mitchell, said: “We welcomed hundreds of thousands of people to the city over the weekend for what was the biggest ever Pride. That’s in addition to the thousands of visitors who came to the city to enjoy a day by the sea and all that Brighton & Hove has to offer.

“Our street cleaners do a tremendous job to keep the city clean during the busiest weekend of the year.

“At all times of the year, we encourage everyone to support them by disposing of their litter responsibly, either by putting it in one of the litter or recycling bins around the city; or by taking any rubbish home with them.”