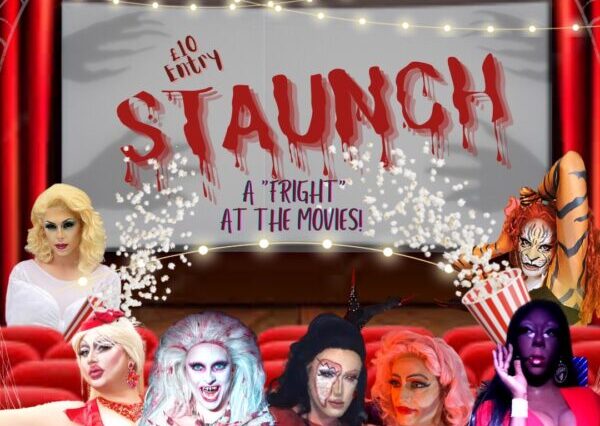 Cherry Fakewell will raise funds for local HIV charity the Sussex Beacon at STAUNCH: A Fright at the Movies at The Curzon in Brighton on Saturday, October 1 from 7.30pm.

Hostess Madame Fakewell stumbles upon an old movie projector and a bunch of old film reels… She thought she would shove it in and give it a go… What could go wrong? The projector has been possessed by an unknown demon and is bringing the films to LIFE!

Will Ms Fakewell be able to stop the projector? Will she save the audience from a horror greater than chipping a nail?? Will she get her pendulous melons out?!? Well, more than likely!

Cherry Fakewell says: “Gather round my darlings, for we have a tale of the FORBIDDEN, a story of the FIERCE and a telling of HORRIFIC, GLAMOROUS, TERROR!

“STAUNCH is a place to celebrate the strange and the queer. However, the October event will be something different as it is time for our one and only HALLOWEEN Special! A FRIGHT at the movies!

“Come on down for a thrill, for a giggle and for a night like no other!

Cherry Fakewell presents STAUNCH: A Fright at the Movies at The Curzon, 7 Rock Street, Brighton, BN2 1NF on Saturday, October 1 from 7.30pm. This event will be raising fund for the Sussex Beacon so take spare change for the bucket.