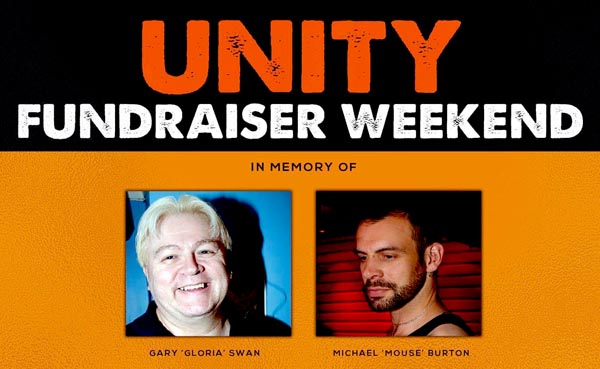 A record number of fourteen LGBT+ venues will take part in this year’s Brighton Unity Weekend, up from the original four of Charles Street Tap, Legends, Club & Bar Revenge and The Queens Arms to raise funds for the important work of The Rainbow Fund.

AFFINITY Bar, Amsterdam Bar and Kitchen, Bar Broadway, Bedford Tavern, Bulldog, Camelford Arms, Marine Tavern, Subline and The Zone Bar, will all have Rainbow Fund buckets and shakers in their venues from Thursday, April 25 – Sunday April 28. Dig deep and help them raise a record amount for the Rainbow Fund in 2019.

The original Unity Weekend was the brain child of managers Chris Marshall from Charles Street Tap and Andrew Roberts from Revenge, to raise the money needed for two memorial benches on the New Steine – dedicated to the late Michael ‘Mouse’ Burton and Gary ‘Gloria’ Swan who passed away just a couple of weeks apart in December 2016. Gloria and Mouse were two big personalities on the Brighton Scene and their loss was very heartfelt by so many.

Chris Marshall, General Manager of Charles Street Tap said; “This is really about creating an amazing legacy for Mouse and Gloria, with so many of Brighton’s LGBT+ venues working together for such an important Brighton cause. It really goes to show, that despite what some may think, the venues on the scene really do get on with each other and this weekend gives us a great opportunity to showcase the true community spirit we have in Brighton”

Andrew Roberts, General Manager at Revenge added; “I’m so thrilled  that so many more venues have agreed to take part in The Unity Weekend this year. The original fundraiser target was for £2000 to pay for the memorial benches and  we managed to beat that target with another £186.30 on top for the Rainbow Fund. This year we only need £200 for the upkeep of the benches – so we really do have an amazing opportunity to blow that number out of the water for the Rainbow Fund.”

This year’s Unity Weekend will take place from Thursday, April 25 to Sunday, April 28 and will see LGBT+ venues across the city working together as one to raise money for the Rainbow Fund.

The Rainbow Fund give grants to LGBT/HIV organisations who deliver effective front line services to LGBT+ people in the city and have just this week provided emergency funding to pay for Community Safety Guardians to patrol St James Street following a recent spate of violent attacks on gay men leaving LGBT+ venues late at night.

Full details of events and venues taking part can be found on the Brighton Unity Weekend Facebook page.