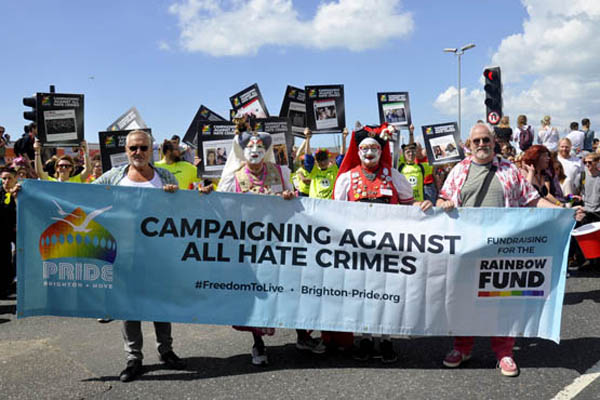 This record amount will be distributed as grants by the Rainbow Fund, the Pride Social Impact Fund and a new Pride Community Fund.

Headlined by Pet Shop Boys and Year & Years, Pride 2017 has been universally hailed as the biggest and best Brighton Pride to date, with Sussex Police and Brighton & Hove City Council estimating there were 400,000 people celebrating Pride in the city over Pride weekend.

This year Brighton & Hove Pride cost organisers over £1.8million to deliver, bringing in approximately £18million to the local economy with visitors spending money on accommodation, retail, food and drink across the Pride weekend.

All money raised by Pride from ticket sales goes directly to the operational and running costs of producing the Pride Festival, Pride Community Parade, Pride Village Party and the Pride Fundraising programme through the Rainbow Fund, a Brighton and Hove based grant-giving fund for local LGBT/HIV organisations, the Pride Social Impact Fund (SIF) and the new Pride Community Fund.

SIF was created in 2015 so that businesses that benefit from Pride could contribute to community groups and local good causes across the City. It is independently run and chaired by journalist, Tim Ridgway with representatives from the The Argus, Brighton & Hove Independent, Latest 7, G Scene and BBC Sussex on the grants panel.

Paul Kemp, Director of Brighton and Hove Pride, said: “We are immensely grateful for the support of everyone who purchased tickets for the official Pride events as well as our sponsors and local supporting businesses all who have helped us raise this record amount of Pride community fundraising. One of the biggest elements of Pride is the Free Pride Community Parade which attracted almost 300,000 participants and spectators, many of who spend money with local businesses across the City.

“We really want local businesses across the City to benefit from the Pride weekend but, apart from contributions from venues within the Village Party zone, there has been a disappointing amount of support locally. Prior to Pride we sent over 2,000 letters by post to local businesses who benefit from the bumper Pride weekend inviting them to support Pride’s fundraising for the Social impact Fund but, to date, no support has been forthcoming.

“Pride is a great event promoting the whole city to a national and international audience, but it’s also about community and responsibility and surely this should be shared by everyone who benefits from the weekend and Pride hope more businesses will help with the fundraising effort in the future.”

Chris Gull, Chair of Rainbow Fund, said: “Once again Paul Kemp, Dulcie Weaver and the team organising Pride have proved that it is truly A Pride With Purpose.

“Once again the total from the £1 from each Park Ticket sold, and £1 from each Pride Village Party wristband sold, together with money collected on the parade route, and fundraising events over the weekend, exceeded the astounding amounts raised in the last three years. It seems impossible that, in a terms of funds raised, this event has gone from raising NO money for local charities for several years before Paul Kemp and Dulcie Weaver took over, to topping £100,000 this year alone.
“The Rainbow Fund is proud that Pride entrusts these funds raised within our community to us in order to distribute to local groups and organisations who support our local LGBT+ and HIV communities. The Rainbow Fund has no overheads, and no paid staff, so every penny donated will go to where it will do the most good.
“On behalf of those who will benefit directly from these funds…Thank you Pride..and well done!”

Tim Ridgway, chairman of the Brighton Pride Social Impact Fund, added: “In the last two years the fund has made a visible and very real difference to dozens of organisations across the city, who have all put a little bit of pride back into our city.

“I want to thank everyone who has contributed towards raising this incredible amount of money and urge organisations across the Brighton and Hove to submit bids when the application process opens this month.”

Applications for Pride SIF Grants open on October 1, 2017 with successful applicants being announced in December.

For information on applications and how to apply for a SIF grant, click here: