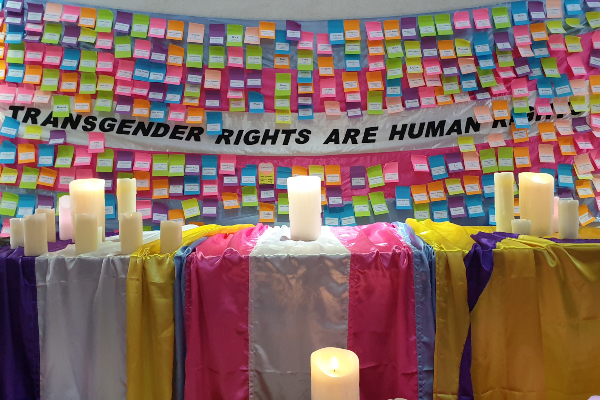 Transgender Day of Remembrance (TDOR) is the annual observance on November 20 that honours the memory of the transgender people whose lives were lost in acts of anti-transgender violence.

It was marked in the city this year by a series of community led events on Sunday 17th November; at Dorset Gardens Methodist Church, the Black and Minority Ethnic Community Partnership centre (BMECP) centre and a planned singing workshop and performance for the Trans and non-Binary communities to be held by the LGBT Community Safety Forum at the Rainbow Hub and Dorset Gardens on the evening of the 20th.

The TDOR events were organised by a committee including  representatives from the Clare Project, Trans Pride Brighton, QTIPoC Narratives, English Collective of Prostitutes & Navigate.

The TDOR service at Dorset garden was standing room only as a series  of key community activists spoke about their experiences, their hopes and the reasons why observing TDOR were important.  Dr Sam Hall the chair of the Clare project welcomed everyone to the event then the Rainbow Chorus sang the first of a few songs.  The Rainbow Chorus also joined up with the Rainbow Chorus Workshop Choir, made up of members of the RC+ the fully inclusive LGBTQ+ singing workshops. This was their first public performance.

Reuben Davidson from All Sorts youth Project talked about the importance of supporting younger people, Emma Rylands talked about her expediences of TDOR, Sam Briffett  spoke about RC+ and her experiences of feeling welcomed when she attended the singing workshops.  Stephanie Scott,  who helped set up and plan the cities first TDOR events,  invited attendees to share experience and insights and then spoke about the importance of remembrance to the trans and non-binary communities and also about the number of people who lost their lives to suicides and others who were never recorded or reported as being murdered.

All attending Dorset Gardens then placed the names of the victims of anti-trans violence up on a large trans rights banner, filling the banner and side lectern with hundreds of coloured pieces of paper each bearing a single name. Many people were visibly moved at this emotional event. There was a  total of 331 reported murders of trans and gender-diverse people in the last year. Migrants make up a high number of the reported murders in Europe. And, of the reported killings of trans and gender-diverse people whose profession was known, worldwide, 61 per cent were sex workers. You can read a full report about the last twelve months recorded deaths here:

The BMECP community centre also hosted a TDOR event providing a safe opportunity to remember and celebrate the lives of those lost. With a full buffet provided by Lunch Positive and stalls,  workshops and activities  specifically aimed at the cities TNB communities.  QTIPoC Narratives, Mind out, Switchboard, Trans Pride, Navigate, English Collective of Prostitutes, were all in attendance along with  poetry workshops and counselling support.

“Trans Pride Brighton is delighted to be able to support Trans Day of Remembrance 2019 in our city. The last few years have seen an increase in discrimination and violence against our communities so we are proud to work in partnership with other local trans, non binary and intersex organisations to offer peer-led support during a difficult time. TDoR is an important day, not just to remember the siblings we have lost to hate crime but also those who have been affected by the transphobic society we live in. We will also make sure to remember our friends and loved ones we have lost through suicide and commit to working together to support the most vulnerable among our communities.  Trans Pride Brighton would like to thank QTIPoC Narratives, English Collective of Prostitutes and especially Grace from The Claire Project.”

Brighton and Hove City Council had the Trans flag flying from Hove Town Hall and issued a statement of support and inclusion to the cites Trans and Non Binary communities  from the cities main statutory partnerships. Brighton & Hove Police tweeted a message of support and a picture of the Trans Flag on the Sussex Police HQ flagpole in Lewes.