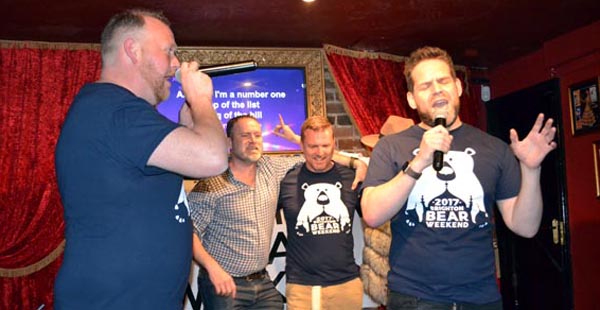 The first ever Bear-a-oke organised by Brighton Bear Weekend at Bar Broadway on Sunday, April 2 was a great success with singers coming out from across the city to join in the fun.

Hosts Chris Hibbert and Jonbee created a party atmosphere in the bar while singers from the crowd picked a diverse range of songs from Disney to The Smiths, making it a night for everybody.

It was so successful that Bear-a-oke is becoming part of the programme over the main Brighton Bear Weekend in June.

The Brighton Bear team would like to thank Bar Broadway, their two wonderful hosts, the singers and all the people who gave so generously to The Rainbow Fund.

Chair of Brighton Bear Weekend, Graham Munday, said: “We were delighted with the number of people who turned up as soon as we were open especially as we are up against the Sunday cabaret circuit and it was a lovely sunny day. We were stunned when opening the buckets at how generous people had been. I want to thank all the people who made the event special and am looking forward to the next one in June.”

The next Brighton Bear Weekend event is the Easter Quiz at the Camelford Arms on Thursday, April 13 starting at 9pm and the Easter Special of Underbears at Subline from 9pm on Easter Sunday.

The Rainbow Fund make grants to LGBT/HIV organisations who provide effective front line services to LGBT+ people in the city.