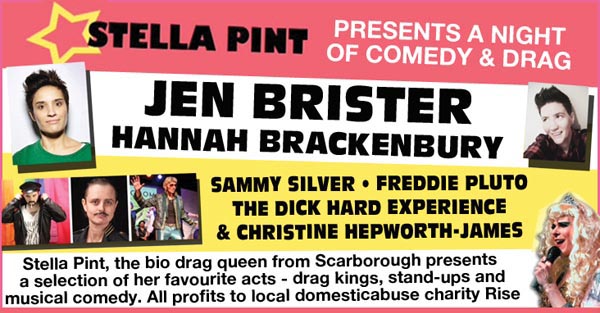 Jen Brister – stand up comic, writer and comedy actor, a regular performer on the UK and international circuit, Jen has written for BBC Scotland and presented for BBC6 Music. In 2016 she supported Frankie Boyle in London, performing her new show The Other One.

Hannah Brackenbury – Brighton-based musical comedian, is well-known on the scene for her silly songs and hilarious parodies. In 2016 she reached the final of the Musical Comedy Awards and performed at both the Brighton and Edinburgh Fringe Festivals.

Sammy Silver – sassy, sexy, surreal, flamboyant little bear cub who is forever on the search for a daddy. He laughs at his own jokes, dances like a nutter and if you’ve got cash he’ll flirt with you like there’s no tomorrow.

Freddie Pluto – a cosmic being, here on planet earth to change lives through his otherworldly psychic powers and drag king magic.

Event:  STELLA PINT PRESENTS… A night of comedy and drag

LGBT History Month is an international month-long annual observance of LGBT+ History and the opportunity to commemorate and remember the bravery of those who campaigned and spoke out over the years to help us achieve the freedoms and equality we enjoy today.

This ground breaking affiliation seeks to engage the city in the wide range of issues highlighted through the work of the Brighton & Hove LGBT Community Safety Forum, as well as partner/stakeholder work.