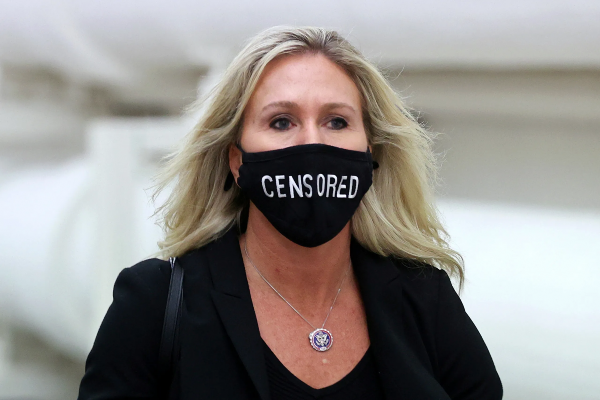 Marjorie Taylor Greene, an anti-trans Republican congresswoman from Georgia, has condemned the Equality Act, causing conflict with Democrat Marie Newman who subsequently hung a trans flag outside Greene’s office. Greene, who is a QAnon follower, tried to prevent the success of the Equality Act , which was formally reintroduced to the House of Representatives last week after being scrapped by the Trump Administration in 2019.

The act, which was just passed by the House of Representatives, aims to add add pro-LGBTQ+ policies to the 1964 Civil Rights Act, including the prohibition of housing, employment and education discrimination. However, Greene argues that the trans inclusive policies will ‘harm women’s rights’, as well as limit ‘religious freedom’. Following Greene’s condemnation of the act, supporter of the Equality Act, Newman, retaliated by hanging a trans flag outside Greene’s office, which neighbours hers.

Many social media users criticised Greene, with a medical professional tweeting: “As a physician, I can tell you for certain that gender is a social construct and not a biological one. I can also tell you that there are more than two sexes.”