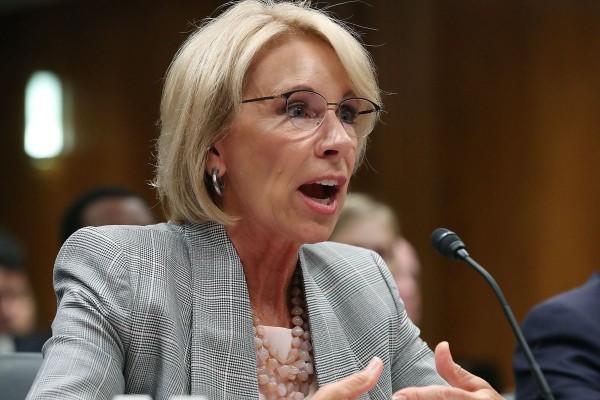 Betsy DeVos, the US secretary of education known for her track record of anti-LGBTQ+ policies, has resigned amid calls for Donald Trump to be removed from office following right-wing riots in the country’s capital. DeVos condemned the recent Washington DC riots in a tweet: “Congress assembled to fulfill its Constitutional duty to certify the election of the next President of the United States, and the same Constitution I swore an oath to support and defend. An angry mob cannot be allowed to attack our Capitol and impede this process. The disruptions and violence must end, the law must be upheld, and the work of the people must go on.”

According to Them, DeVos has left a “trail of devastation in her wake that will wreak suffering and harm on Americans for years to come, particularly vulnerable LGBTQ+ students”. She oversaw an initiative to withhold $18 million in Department of Education funding from Connecticut schools that maintain ties with trans-inclusive sports organisations. Devos also implemented new regulations which would allow schools to exclude LGBTQ+ students from other educational programs.

She was known to be a close ally of Trump, and during her time working alongside him, she showed hostility towards trans and gender diverse students, orchestrating the end of an Obama-era rule that required schools to accommodate trans students. A handful of other Trump appointees have resigned following the riots last week, including chief of staff, Mick Mulvaney, deputy national security advisor, Matthew Pottinger, and chairman of the council of economic advisors, Tyler Goodspeed.