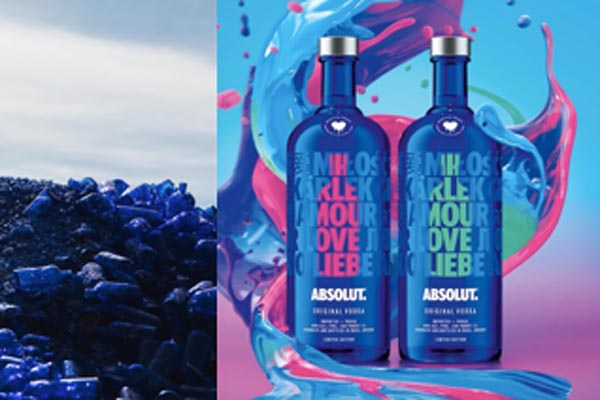 A new limited edition bottle called Absolut Drop shows that a drop of love can go a long way.

ARRIVING just in time to celebrate LGBT+ History Month, Absolut’s new limited edition bottle, Absolut Drop, celebrates the power that love has for making a real difference in the world.

Why not take something negative and hateful – and turn it into love?

Absolut did just that and travelled to anti-LGBT+ and racist protests around the world. There, they collected ink from the physical signs that spread hurtful messages, and repurposed into something positive – a message to spread love.

Using pioneering creative technologies, they extracted the ink from the signage and utilised it in the production of the Absolut Drop bottle artwork. Each of the bottles feature a drop of ink from the signs within the mint and pink bottle outlines, changing the intended negative message into something positive and spreading love through action.

The bottle design is emblazoned with the word love in multiple languages to represent love having no borders, and the UK version of the bottle also features a rainbow heart in honour of the LGBT+ community, reading: Taking Pride in Diversity.

Ink is not the only element that has been repurposed; as the bottle has also been made using 70% recycled glass including recycled glass from previous limited edition bottles.The brilliance of the bottle colour is the result of using cobalt colored glass instead of using coating or any other type of decoration. Colouring the glass meant that Absolut could maximise the amount of recycled glass content in the bottle, without having to worry about discolouration

To find out more about the bottle and pledge to become an LGBT+ ally click here:

Absolut Drop is £19.45 and can be found at the following stores from February 1: Harvey Nichols, Selfridges, Sainsburys, Waitrose, Asda, Morrisons, Co-op, Nisa & Spar.