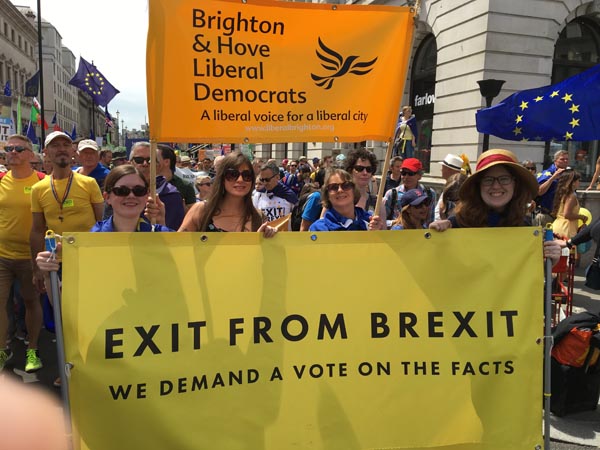 Lib Dems demand a final say on the Brexit deal!

AS UK-wide calls for a final say on the governments Brexit deal grow louder and more insistent, Brighton & Hove Liberal Democrats will join with other pro-EU groups, in a Carnival of EUnity on Sunday, September 16, 2018 from 4 – 6 pm to demand the Government agree to such a vote which includes an option to exit from Brexit.

The march will be co-ordinated by Brighton & Hove for EU and the Green Party.

They are demanding that 16 – 17-year-olds, EU citizens in the UK and Britons living in the European Union should be eligible to take part.

Colourfully dressed Liberal Democrats are asked to assemble by the Peace Statue on the seafront in Hove at 4.15 pm, followed by a march to the Brighton Centre, where the Liberal Democrat party conference will be taking place.

Marchers will arrive at 4.45 pm to meet up with the non-partisan marchers, who will have started from Brighton’s Palace Pier, carrying large placards listing rights that Britain enjoys as a member of the European Union.

Event: A Carnival of EUnity: We Demand a Final Say on the Brexit Deal