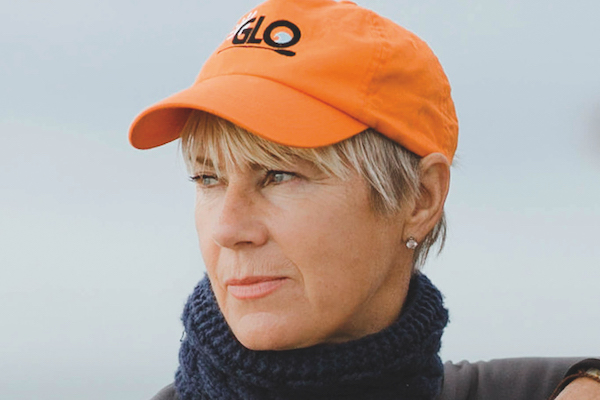 For 26 years Andi Derrick worked in the film industry as an Emmy award-winning foley artist (creating sound for film and TV). From the Harry Potter and Bond movies to The Crown and Peaky Blinders, Andi has created countless sounds for countless movies.

Today, Andi couldn’t be further from the insular world of making sound magic in dark studios – she is now a Stand-Up Paddleboard (SUP) instructor, running her own business, Glo Wellbeing, from Goring beach, at the Sea Lane Cafe near Worthing.

It’s a massive life change – and was brought on by an apocalyptic event. Eight years ago, after three misdiagnoses, Andi was told she had stage three endometrial cancer. Two weeks later, the diagnosis was of stage four. “I was told I was having palliative chemotherapy and there was nothing the doctors could do for me.”

So she started looking into alternative treatments that might help, from Chinese herbs to Jin Shin Jyutsu (an ancient Japanese healing art), and all things spiritual. She also found herself going back to the water again and
again.

“As a foley artist I was in studios for 26 years – dark, dusty, dirty, brilliant places for creativity, but not really good for my health.

“After the first lot of chemo I went to a Greek island and I started to feel much better. I was in the sea all the time and I’d really missed it. The second time I went, in 2015, there was a great woman called Catherine who had a
paddleboard, something I’d never seen before. She said, ‘jump on girl, off you go’. So I got on and off I went. I paddled for an hour and when I came back, I went: ‘Oh my god, I need more, that’s changed my life.”

Returning home, Andi treated herself to a Red brand 10ft 6in paddleboard and took to the water as often as she could, meeting fellow paddleboarders, among them Mark Beadle, who would become her business partner.

“I was getting myself back to a really good place, feeling stronger than I had for years. I found myself thinking about my future again, that maybe I’ve got a life to live after all.”

So she and Mark set up Glo Wellbeing. “It was my calling, a new personal passion centred on my wellbeing, and I started to let the foley go.

“In 2016 I took a leap of faith, contacted the council, and asked if I could have a postage stamp-sized spot on the beach where I could hire boards and teach paddleboarding.”

It turned out the council had just decided to designate a spot for that very activity and there were just 24 hours left to get a pitch in. “I sat down, gave the application my best shot, and crossed my fingers.”

Two weeks later she got the call that cemented the deal. Both Andi and Mark by then had achieved their BSUPA qualifications, so “we just ran with it and now, four years later, it has really taken off”.

In 2017, baffled doctors told Andi her cancer had gone. “Then six months later I had another CT scan and my oncologist said: ’It’s a miracle. You are good to go’. I was clear, not even in remission.”

I attributed my recovery in part to my diet, which I changed considerably – no sugar, no meat, no dairy. And, of course, there was the Chinese medicine, Jin Shin Jyutsu, and me sitting down with myself and letting go of negative baggage I no longer needed to carry.

“I changed my lifestyle – I was always a glass half-full girl, I didn’t have to work on that, but god I had to dig deep.”

Next May it will be nine years since her diagnosis.

Mark left Glo Wellbeing after three years to concentrate on his main business that was now expanding, but Andi is now “about to go into what will be the fifth year of Glo Wellbeing, with her small and growing business, encompassing river trips, retreats, European breaks, and yoga.

So, aside from the fact it improves balance as well as core, leg and arm strength, what is it about paddleboarding that is so magnetic?

A lot of it is about being in the ‘now’. “When you go out on that water you can’t think about anything else, you’ve got to be focused on where you are. This is a great way to rebalance and recentre. As you get better and your confidence grows, you can go up a notch and start paddlesurfing, SUP racing, which is brilliant. The sea offers you loads of options.”

Andi herself has recently taken up wing surfing.

“On the river it’s tranquil. It’s all about nature, seeing that little bit of land, wildlife and water from a different perspective that we never get a chance to see in a car or walking. It is so uplifting and magical, the mental wellbeing is massive. What’s not to love?”

As long as they can swim, anyone can do it, which is why the SUP community is so big. And it’s also a great space for LGBTQ+ people, as it’s a wonderful way of meeting people and making new friendship, says Andi.

“These two communities have no boundaries, so they merge together beautifully. We all face challenges in this world and as a gay woman I know only too well some of the difficulties we may face. One of the great things about SUP and the SUP community is that we leave our problems behind. As soon as you hit the water you are transported into a different world, a supportive community that doesn’t give a hoot what you are, where you’re from, what colour you are or what your sexuality is. It’s a win-win.

“It’s a great place to build confidence too. I’ve met people who don’t think they can do it, then they come off the water and punch the air and say ‘what’s next?’. Suddenly their lives have opened up just from that one lesson. It’s given them confidence because they didn’t think they could do it and they did it, so now they’re going to go rock climbing!

“Now I’ve fallen in love with wing surfing. I don’t think I’ve ever been as strong and fit as I am at the age of 58. One day I’d like to teach wing – why not?!”