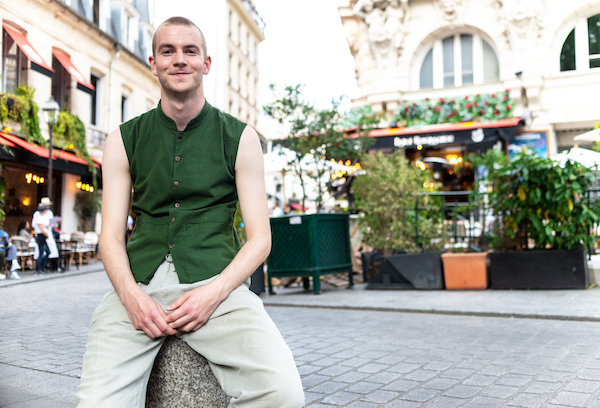 Elska Magazine, a publication dedicated to sharing the bodies and voices of LGBTQ+ communities around the world, has put the spotlight on Paris for its latest issue. Inside readers can get up close and personal with a cross section of beautifully ordinary local men from one of the world’s most legendary capitals.

“It was essential that one day we’d make an issue in Paris, it’s just one of those great world cities,” says Elska editor and chief photographer Liam Campbell. “But it was a little intimidating to approach a place with such a reputation, and one that evokes so much stereotype and expectation. The ‘City of Light’, the ‘City of Love’, the city of rude waiters and mile-long museum queues… I decided that the best way to approach Paris was to go without any plans, to just meet whoever was up for meeting us and to let them guide us through their city and their lives.”

“I tend to assume that most stereotypes are wrong, but overall the result of my trip matched the
mythology, especially in terms of the romance factor,” continues Liam. “This city is gorgeous and the
people are certainly beautiful, but it is in the way they carry themselves, express themselves,
reveal their love for Paris and for each other that really seduces. This is especially apparent in the
stories that each of the men wrote for us. It’s not necessarily that these are love stories, but the
way they communicate simply drips with warmth and allure. They really make you fall in love with
Paris, with them.”

Inside Elska Paris readers will meet ten local men who are part of the city’s LGBTQ+ community. Each was photographed in their own neighbourhoods and in their own homes, revealing some of their city, their style, and their selves. The photography provides a truly intimate and revealing way to get to know a slice of Parisian gay life, which is then taken further by the inclusion of honest and personal stories penned by each of the participating men. Some of the men you’ll meet include:

Romain D, who invites us to join him on a very Parisian sort of first date that includes drinks, dinner, and beyond;

John B, who takes us on a trip to the East, where he talks of his falling for three boys – one in Belarus, one in Ukraine, and one in Poland;

Guillaume G, who shows us how Paris made his colours shine, shaping him into the person he is today;

Elska Paris is 196 pages and is available from a select group of shops around the world as well
as for order online from the Elska website. Also available is a companion zine called Elska Ekstra
Paris, containing six more men plus hundreds of pages of outtakes and behind the scenes stories.