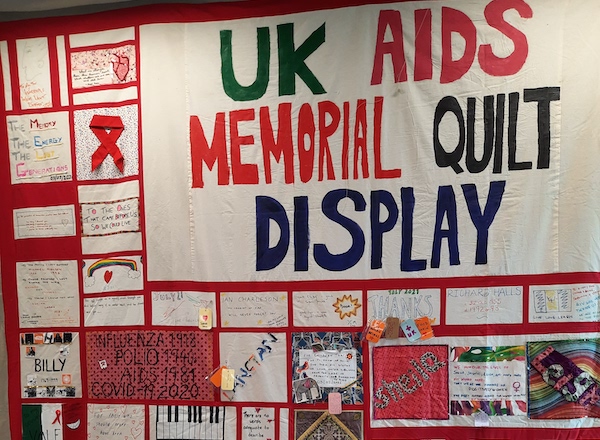 During the 2022 Commonwealth Games, Pride House Birmingham provides a safe space for spectators, athletes, coaches, and allies from across the 54 member states competing, 35 of which still criminalise same-sex relationships. Pride House offers an education room, bar, sober space, exhibition space and, of course, a place to come together and watch the games.

What’s more, Pride House also has a packed line-up of events scheduled throughout the games including an exhibition of the UK AIDS Memorial Quilt. On display in the Southside Building, the UK AIDS Memorial Quilt is a moving piece of social history that tells the stories of the many people lost to the AIDS pandemic during the ’80s and ’90s from those who loved them; their friends, family, and partners.

The UK AIDS Memorial Quilt is part of an international movement that began in San Francisco and is aimed to raise awareness of the impact of AIDS. Now, it stands as a celebration of the lives lost, and a reminder that those living with HIV today still face stigma.

In total, there are 20 panels of the quilt on display in Birmingham’s gay village, each of which consists of smaller panels stitched together, commemorating someone who died of AIDS complications.

The lives remembered include those of the writer Bruce Chatwin; the artist and film maker Derek Jarman; the actors Ian Charleson and Denholm Elliot; gay rights activist Mark Ashton; and the photographer Robert Mapplethorpe. There are also QR codes that accompany the quilt, which will take you to emotive testimonials, photos and personal documents that give even more history and stories behind these panels.

The UK AIDS Memorial Quilt is on display until August 8. Slots are free to book online and available every hour with a maximum of ten people viewing each hour.