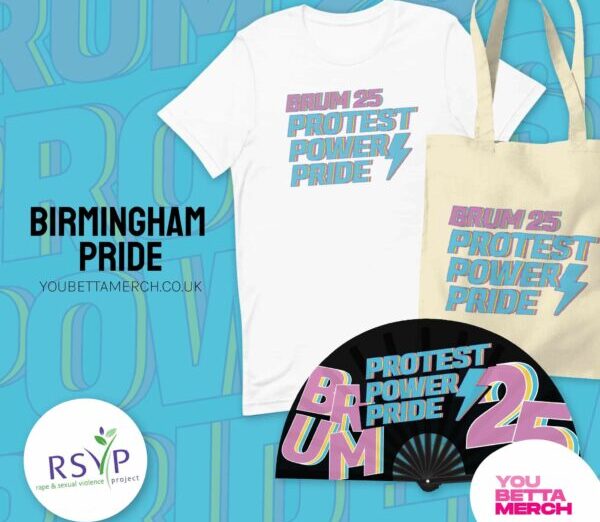 The products, which included a fan, a t-shirt, and a tote bag, featured the words Brum 25, Protest Power Pride in celebration of 25 years of Pride, protest and power in the city. Twenty per-cent of profits from the sales of these products will be donated to RSVP, a Birmingham and Solihull-based charity which supports LGBTQ+ individuals who have been subject to rape, sexual assault or sexual abuse.

You Betta Merch, which is run by Elliot Barnicle and Izzy Hard (Elliot Izzard), “was created by queer artists for queer artists… to support LGBTQ+ performers who want to develop their brand through means of merchandise.” They told Scene magazine that the sales of the Birmingham Pride merchandise had raised £75, and while this isn’t as much as they would have hoped, RSVP’s website shows that just £5 can pay for a travel ticket so an abuse survivor can attend counselling, while £20 can pay for books or toys for a sexually abused child.

When it was first announced that RSVP would be the recipients of this year’s Birmingham Pride merch fundraising, RSVP West Midlands said: “Thanks so much for thinking of and fundraising for us too. And for showing survivors you believe them.”