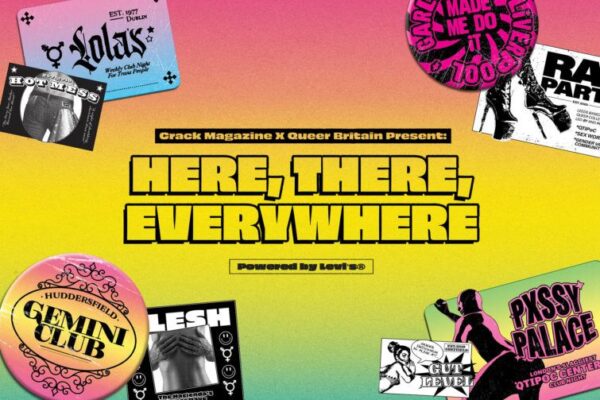 Exploring 50 years of British LGBTQ+ nightlife and parties, Here, There, Everywhere is a map that has been lovingly created by Crack magazine, Queer Britain – the UK’s first LGBTQ+ museum – and Levi’s. The map is illustrated by Leon Davis, and features editorial and research by Jake Hall and Lisa Power.

An article by Crack magazine explains that the map “brings together over 30 parties from the UK and Ireland, each with its own history and bespoke illustration. Collating both past and present nights, the map is a pin-drop on 50 years of music, activism and movement.”

Writing about Birmingham’s Nightingale Club as part of Here, There, Everywhere, Crack magazine said: “The last decade in particular has seen LGBTQ+ venues across the country forced to close their doors. From Camden’s beloved Black Cap to Leeds’ Bright Inn, rising rents and gentrification have dealt a huge blow to Britain’s LGBTQ+ nightlife.

“Here, There, Everywhere is an homage to the trailblazers and torchbearers rallying against these obstacles.” writes editorial lead Jake Hall. “It’s not a definitive list – we all have our own favourites – and as such does not claim to be exhaustive. It’s not a rundown of the most popular, the most successful or the best club nights. It’s a tribute to venues and collectives that laid the foundations, that are trying new things, that championed – and are championing – marginalised voices, that provide the backdrop in which we find out who we authentically are.”

“Despite this adversity,” continues Crack magazine, “Birmingham’s Nightingale Club has survived more than five decades. It all started in 1968 when Laurie Williams and Derek Pemberton bought what used to be a run-down Indian restaurant in Camp Hill. Three venue changes later, the club – now located on Kent Street and marked out by beautiful murals – is a three-storey superclub, with a rotating cast of club nights, drag queens, go-go dancers and DJs.

“Variety has kept the Nightingale fresh. Music varies based on the event, but club nights such as the campy, ‘90s celebration Glitter Shit and the emo-heavy I’m Not Okay – the brain child of queer collective DragPunk – have found their feet at Birmingham’s most iconic gay club. Even after five turbulent decades, the club’s cultural momentum shows no sign of slowing.”

The maps will be printed in a limited number, available via Crack magazine and Queer Britain, and all proceeds will go to Queer Britain to fund their work “recording, displaying and amplifying British LGBTQ+ history.”