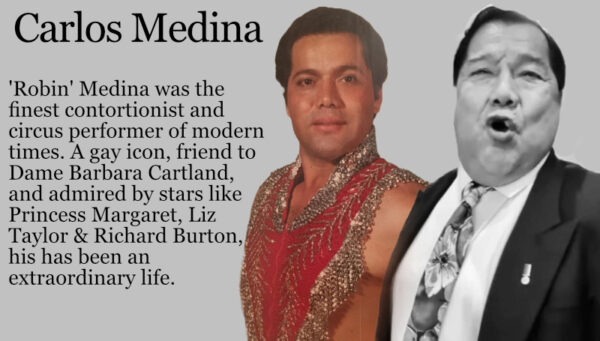 Carlos ‘Robin’ Medina was a circus star – admired by stars such as Elizabeth Taylor and Richard Burton – a friend of Dame Barbara Cartland – and a legend of Birmingham’s gay village. Born in 1951 in Venezuela, his father sold him to the circus aged nine where according to his biographer John Wright (More Swings Than Roundabouts: The Life of Carlos ‘Robin’ Medina), “He had a strict regime of training by the circus ‘family’, but in reality, it was like modern slavery. The circus was called ‘a family’ when it was anything but…”

Despite this dark start in life, Carlos always looked on the brighter side of life, saying: “If I didn’t have the circus in my life, I wouldn’t be here today. I never, ever performed for the money – always I go for the applause.”

John Wright described Medina as “the finest contortionist and circus performer of modern times.” However, a 40ft fall at the age of 38 ended his circus career, leaving him to live out the rest of his life in Birmingham. Sadly, at the age of 72, Carlos Medina passed away.

Lawrence Barton, Birmingham Pride Festival Director and chair of Southside BID, said: “Hurst Street has lost one of its legends, Carlos Medina was a star in the real sense and now he shines brightly in the heavens. We will never forget him and he will doubtless be remembered at this year’s Pride.”

While Tales of the Second City added their own tribute to the floods of words about Carlos shared online, they wrote: “He was an outrageous firecracker, who could sparkle as bright as the gaybourhood’s Rhinestone Rhino.”

Following the loss of such a bright personality, Birmingham’s LGBTQ+ community have begun fundraising to give Carlos ‘Robin’ Medina a fitting send-off. A JustGiving page created by his long-time friend and neighbour, Darren Hodson, says: “While we are all grieving the loss of this most incredible man, and a queen of the community, we also need to be practical and do what needs doing for his final journey.

“Carlos has no family to take charge of his funeral arrangements but he does have an amazing circle of friends. As his friends, we need to raise the money required to give him a fitting send-off. Carlos left no funeral plan or instructions other than what he expressed verbally to his close friends…

“Carlos was a huge, colourful and flamboyant character that was a true reflection of the LGBTQ+ community, past and present. He was also a circus performer and trapeze artist in his youth, working with Billy Smarts, Chipperfield, Zippos and more. His funeral needs to reflect this and respect his commitment to the community, it’s people and his energy in being a vibrant part of it!”

To donate, head to the dedicated JustGiving page, where more details on the arrangements for his funeral will be updated in due course.