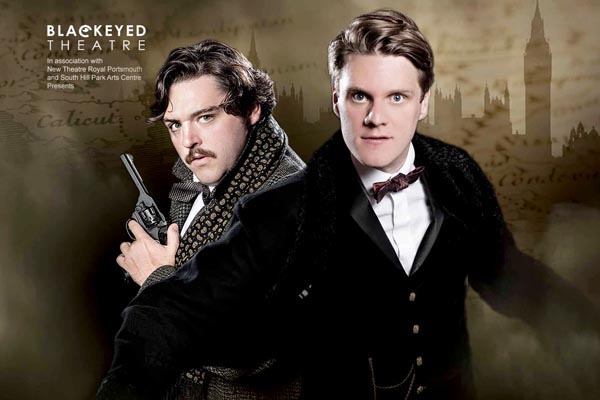 This play from the second Holmes novel by Arthur Conan Doyle is a neat and smart piece of theatre,  produced by Blackeyed Theatre and played in atmospheric lighting with live music from the actors playing a wide range of instruments to set tone, scene and emotional atmosphere.

The set is minimal but used to extraordinary conviction, subtly transforming from sitting room, to street, to dog pound, Indian Fort, prison, a thrilling steam launch chase down the River Thames and back again via a rather delightful carriage ride, the actors seeming to enjoy the physical theatricals as much as the audience.

The plot is as the plot does, crammed full of adventure, romance, some well-timed comedy and some rather brilliant deductions, it’s Sherlock after all…

When Mary Morstan arrives at 221B, Baker Street to request help with the mystery of her missing father, Holmes takes the case and together with his companion Dr Watson enters a murky world of deception and trickery, unravelling a complex plot involving murder, India, corruption and stolen jewels.

The first half is bouncy narrative/set up and we get to meet Homes, Watson, Mrs Hudson and Mary Morstan – Watsons future love interest –  and with some direct to audience commentary Watson sets the scene –  we see Holmes at his bored hobby, injecting cocaine and Mrs Hudson’s delightful teasing of Watson.

Watson played by Joseph Derrington is every bit the ex-military man, staid but loyal, staunch but human with a charming modest wit. Holmes is played by Luke Barton as a cross between a fidgety Matt Smith era Dr Who and Edward Scissorhands, but convinces with his ever so slightly tortured genius and manages to engage us with Holmes as a person, and a phenomenon.

The whole cast, some of who do double, triple and quadruple roles are excellent,  and  there’s not one who isn’t interesting when on stage, or playing one of the many instruments to set the scene. With music composed by Tristan Parkes the soundscapes are lovely, blending sitar, guitar, flute, and trombone into an Anglo-Indian delight.

The second half is slightly better paced and has a long and fairly interesting digression into the villain’s backstory but from a surprising perspective and the company have chosen to place this emphasis on a decolonising narrative focusing on the corrosive effects of imperial exploitation, racism and the dehumanising effects of the relentless drive for profit. There are some extremely unpleasant truths examined and although there’s not time enough to really examine these subjects there is enough human context to make them believable and uncomfortable.

Good theatre should both entertain and challenge and this careful adaption for the stage by Nick Lane does that comfortably. I enjoyed this decolonising narrative, which was handled with careful writing and committed dignified acting, and it certainly helps to present this late Victorian storyline to a present-day audience without too much focus on the entitlement and privilege of the main protagonists. This added to the depth of the play and with some pointed remarks about respect and how brutal regimes produce brutal people felt oddly contemporary.

With this company of multi-talented actors, musicians and physical theatre performers the play felt most agreeable and as we whizzed home across Beachy Head with the roof down, the stars twinkling in the deep Sussex night, my companion animated and avidly discussing the interesting narrative, how attractive was the actor playing Holmes, the utter delight of a live trombone on stage and the rather comfortable surrounds of the Devonshire Park Theatre itself, I felt most congenial.

Plays until Saturday, May 4.