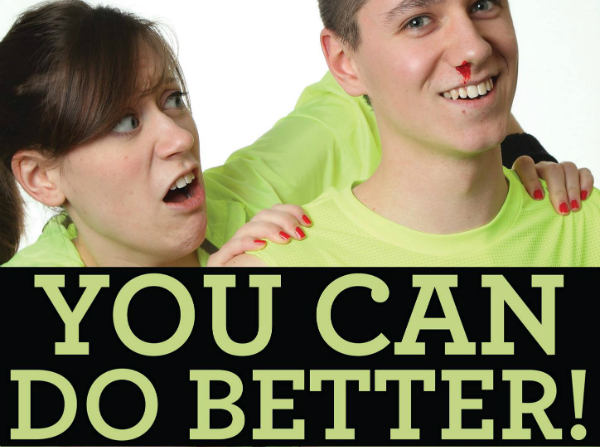 You can do better

Brighton based duo Puppy Fat bring us a collection of their characters all suffering from the triumph of self-delusion with some dark/ish insights into their own failures, so far so ‘League of Gentleman’ and although there were some well fleshed out characters; the ex-child star, the dumb American tourist, the aggressive gym instructor, the failed employment motivators I didn’t feel I saw anything original. The strongest parts of the shows worked well, a running gag about stalking, a ‘Diana’ wig and some relentlessly sweet reality TV contestants being goaded on by the wretched producer to behave badley.

They are both engaging young performers with sweet smiles and work well together although the tension and strains were alluded to rather than explicitly teased out, which was a missed opportunity.

When the writing and acting jelled they were funny and I enjoyed some parts of the show, but mostly I wondered where the laughter was supposed to go, or groaned at some predictable set ups. I found it odd that there was no material on social media, of any sort other than a few throw-a-ways about being out of touch, surely these kids spend their lives on-line and also though it odd that there was no LGBT material in the show either, both performers and all characters appearing to be firmly straight, more self-delusion? Do these kids really come from Brighton?

You can check them out on the Face Book here

THE Theatre Box is a great venue, its three shipping containers welded together with a rack of seats stuffed inside, it can get a bit hot and stuffy after 40 minutes but the acoustics are good, the lights work well and there’s enough space for some decent comedy to take place.

Over all these are a sweet pair of young comedians, well-polished but without the depth of material they thought they were in possession of, there were hints of a crepuscular edge to their humour but the sweetness always edged its way back in, but perhaps this was the point. I got the feeling they were looking out for a BBC Three Series.  They couldn’t have named the show better as I think they certainly could have done better, I just suspect the irony – oddly enough considering their constant subject matter- wasn’t apparent.

Disappointing, a new Brighton based sketch group is always worth supporting, although it has to be mentioned that there was a large part of the audience who persistently laughed throughout the entire show, but I just assumed they were mates as they laughed as much for a nose wrinkle as they did for a half decent line.