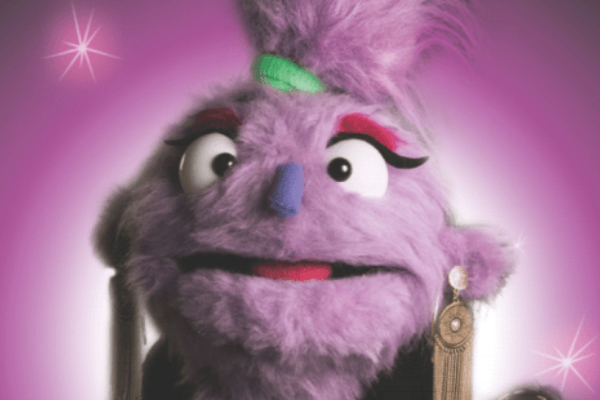 The Prophetic Visions of Bethany Lewis

After a bang on the head from a tin of beans an ordinary puppet-woman becomes a world-renowned psychic after having some pretty crude and dark visions, she goes viral, becomes a huge TV and internet sensation then realising she’s trapped in a empty world of ego maniacs and drug fulled vanity projects fakes her way out of the mess.

A tale of deranged fans and A-list rivalries. Debauched parties, and an affair that shocked the nation. In this no-holds-barred exclusive, Purple Puppet Beth guides her audience through the secret world of fame, and the events that would change her life forever.

This is a fun, filthy, borderline manic show, full of silly soft multi coloured puppets who are foul mouthed but surprisingly caring for each other, like South Park and the Muppet’s had Moomin themed babies. The story is nuts, and goes off into all sorts of tangents, but follows the (self?) narrated story of Bethany as her fame grows and the impact of it does also.

It’s fast paced and  a cast of three actors manipulating 15 puppets dash up, down in and out to make the show work, with the odd very funny deconstructed bit of puppetry.  I laughed a lot, as did the very appreciative audience and filthy puppets seem to be very popular, and with this show it’s easy to see why.

The plush character are brassy, loud, feel real, and the clash of fantasy and reality work well, There’s plenty of social commentary in it, plus some searing critique on fame and seeking love in the world and some pretty funny jokes on current affairs.

All in all a good, funny and filthy night out with some characters that will stay with you. The Prophetic Visions of Bethany Lewis is a thoroughly squarky suidly show with a huge heart which allows these three cool puppeteers to tell a modern morality tale with a bouncy, punchy but essentially light touch.

Catch ’em if you can.