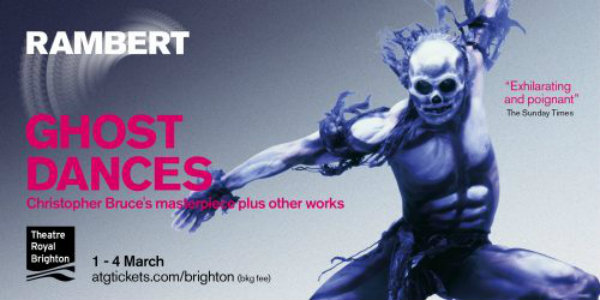 Ghost Dances and others

This is their 90th year and their formula of combining the talents of artists, musicians and choreographers is on display with this collection from the back catalogue of some of the great commissions that Rambert has brought forth.

Last night at the Theatre Royal we saw Flight from Malgorzata Dzierzon which brought the hopes and dreams of peoples as they shared stories of movement and migration to the stage, with an urgent series of interlocked dances telling the stories of seeking a new home, with walls and barriers conflicting, supporting and enclosing this allowed the Rambert to explore intimate movements in groups of two are three while allowing the expression of the whole mass to develop. Technically brilliant and with an honest emotional core this was my favourite piece of the night and a great opener.

Next up was Tomorrow, which inhabited the dark and dangerous world of Macbeth. Building on her recent, landmark production of the play, Lucy Guerin’s dance work gives physical life to the psychological conflict that led a man to murder. Tomorrow is Lucy Guerin’s first work for Rambert. And these two parallel dances interconnected but running in opposite directions in time gave some glorious moments of full ensemble movement, this is a frenetic, passionate piece with a dark central narrative. Done with panache this evening.

Then closing with the due famous Ghost Dances. The masterpiece of world-famous choreographer Christopher Bruce, Ghost Dances is possibly the most popular work in Rambert’s history. It tells stories of love and compassion, as death – in the form of the iconic ‘ghosts’ – interrupts the daily lives of a series of ordinary people. Created as a response to political oppression in South America, it uses imagery from the Day of the Dead and bewitching traditional songs to create a moving, intensely human work. This revival is the first time it has been seen in the UK since 2003.

Evocative and as reflective as it was the first time around this piece hushed the audience and reverberated around the rococo inners of the Theatre, looking, pressing, trying to get out into the night, to embrace the crepuscular heart of this piece and find, eventually some sort of acceptance. The costumes from Belinda Scarlett brought a raw tribal edge to the movements and the relentless pushing narrative of the music arranged by Nicholas Mojsiejenko gave the emotional heft this piece requires. The musicians were on top form last night and provided some superb musical accompaniment to the movements.

As usual with the Rambert their superb attention to details coupled with the passion and commitment of these young talented dancers combines to give a gripping evenings performance, one which brought the full very excited house to it’s feet and deliver an ovation to this team at the peak of their game and seemed to delight my companion, his first attendance at dance as performance.

It is their commitment to excellence, to presenting new and historic works, and to taking world-class dance to the widest possible audience nationwide, that makes Rambert Britain’s national dance company.

Catch ‘em if you can, Until Saturday, March 4