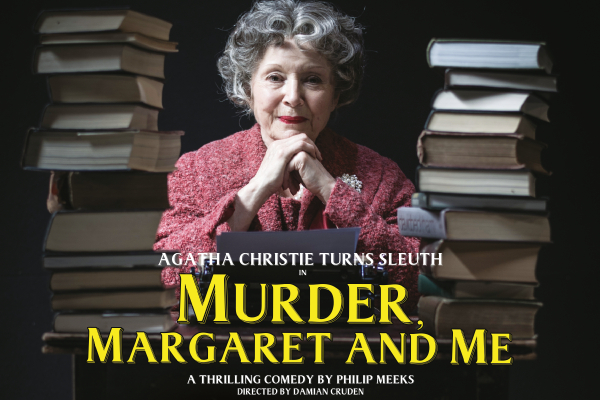 Murder, Margaret and Me

Agatha Christie and Margaret Rutherford should never have been friends. But they were. Their paths crossed when they found themselves at the heart of one of British cinema’s most successful franchises. However, the Miss Marple films almost didn’t get made.

Murder, Margaret and Me is a story of friendship, identity and the achievement of women in the long-lost world of the silver screen.

It’s certainly a lovely piece of acting, three excellent actors interacting in some rather delightful character set pieces but the intersections of their lives seems forced, and oddly unfulfilling. Both of them have secrets, none of them terrible interesting to a modern audience and the really interesting parts of their lives used as throw away lines, not explored or chewed over, a missed opportunity to explore deeper . The high point of drama is the pilfering of some gooseberry jam from tea at Claridge’s  and the thrill that went though the Eastbourne audience was palpable. Perhaps I’m a bit jaded,  or perhaps I’m just so over gooseberry’s.

Two older women, both hugely successful and with a level of agency unusual in women of that time circle each others carefully constructed public images, creeping closer and trying to learn what it is that’s real and authentic about the other. There are tender disclosures and gentle revels but the seriously barbaric truths in their lives, which possible drive and scare them are left to lurk in the shadows, but perhaps this is the point of this play. Not some clever pathological and forensic analysis of these women and what they thought of each other, but a more genteel, very English, entitled, posh colonial,  cardigans, tea and stiff upper lip bumping of actor and writer over something which gave them both value; Marple & fame. We discover their shared vulnerability and gather an understanding of the ways they have fought to protect themselves from the expectations of public and life in general.

Lin Blakley’s Agatha is perfectly in control, Sarah Parks’s ‘Peggy’ Rutherford all jutting jaw and turning head is wonderful, quiveringly real,  and never tips over into caricature, a lost type of English women, and Gilly Tompkins Spinster  performances is touch perfect. All three excel at bringing these formidable characters to life, but as real people, as women of their time and in context but allowing us to absorb their personal attitudes and gain some understanding, although not much, about them as people. The spinster narrative character which both links and unpicks their lives is a lovely touch, speaking directly to us with a glint and twinkle in her eye.

The performances-  which are a serenely good piece of theatre – are left as islands of meaning in a still narrative sea where we bob in moments of Sargasso stillness,  sighing and looking around, pulling our cardigans around us and listening to the clock ticking away the second until we can, decently have, another schooner of sherry.

My companion, under 40 and only knowing Marple from the television adaptations didn’t have a clue what was going on, who was being referenced, name-dropped or alluded to and although impressed by the gentle and convincing acting, loving the shoes and appreciating the set, left somewhat confused about the narrative aim of the plot. Not something you’d want to do from a play about the queen of denouement.

If you’re a fan of Christie, or Rutherford or appreciate a well done and gentle period setting for a play then get along for a superb evenings entertainment, if you’re excepting some gripping and interesting narrative then you’ll be disappointed although it’s very pleasant to watch in an un-challenging way.  It did leave me wanting to learn more about Rutherford’s curious personal life and relationships and her adoption in 1968 and full support of her trans daughter and (later) biographer- Dawn Langley Simmons, now there’s a real story waiting to be told.

Appreciative note for the programme, very stylish and informative

for more info or to book tickets see the theatre website: