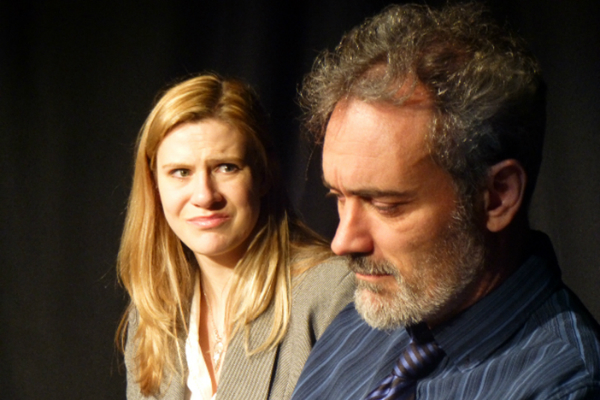 Blackbird charts the tense confrontation between Ray and Una, who has found him again 15 years after the abrupt ending of their apparent relationship. As recriminations fly, we see that both are irrevocably damaged. This taut and unflinching drama builds relentlessly to its explosive conclusion.

This heavy uncomfortable piece tackles the scratchy nasty subject matter of pedophilia through a young woman tracking down the man who’d abused her 15 years prior when she 12 years old. It was a two-handed piece predominantly and centred around the woman looking to understand what had happened all those years ago and ultimately make her peace with it. It’s dark, rough, in your face and drips with recrimination, guilt and unresolved issues.

The acting was excellent, gripping, engaging and passionate, Una especially, and although her older groomer and abuser Ray was more difficult to sympathise with he managed to add a human layer to what is frequently a demonized two-dimensional character. Una went through the full range from angry, confused, hurt, infatuated etc. and at one point delivering a powerful 10 minute monologue which gripped the audience .

This is a well-paced play, with some serous narrative tensions going down, confidently acted and the hour and a half flew by despite the uncomfortable subject matter. Towards the end we saw Ray’s desire for Una reveal itself culminating in his step daughter turning up to fetch him whilst his partner was in the car outside with Una attempting to hide in the corner. The step daughter’s character displaying just enough affection to Ray to have Una, and us, wondering whether history was repeating itself.

The play begins straight into the action with the actors held in pose as the lights came up and it took me awhile to settle into the play, when I did I was rewarded by this challenging in your face piece of fresh writing and superb acting. A classic bit of thrilling chilling fringe theatre.

The Rialto Theatre continues to produce and nurture some serious new talent and showcase award-winning shows and new writers, along with pioneering music nights and their cool cocktail bar. See their full up and coming events listings here.