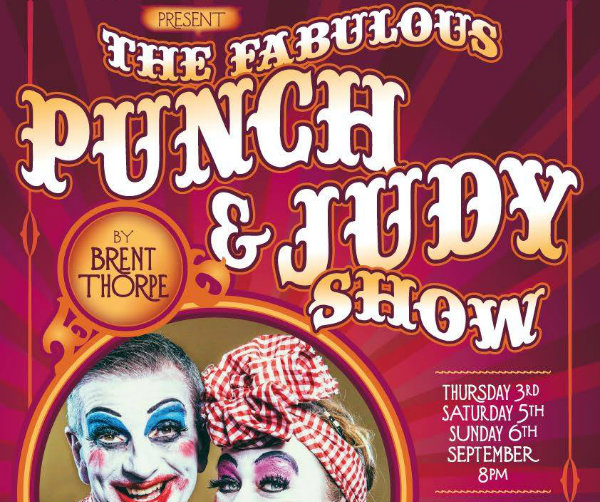 With elements of Brecht savagely intertwined with Restoration bawdiness this is a surprisingly sophisticated deeply tongue in cheek utterly filthy piece of perfectly timed understated crude, rude and provocative brilliance.

Using the Australian clichéd idea of vulgar self-serving entitlement obsessed thick white men and their murderously misogynistic attitudes towards anyone else the Café Debris team lift this show up into a realm of satire that is just plain fucking oddness with a passion and commitment which is rare.

Look! don’t read any more of this, book now!

It’s a lovely clash of style, clever full-on Queer satire with its perfectly formed internal strangeness – think Rocky Horror via John Walters, Edith Massey at The Cockettes, Joe Orton revisiting Neighbours, Marlene Dietrich doing Stanley Kowalski.  It’s all these things and more and what it is at its heart is a lovingly reenacted puppetless Punch and Judy show with all the politically incorrect savagery and unpredictable violence exaggerated and teased out in ways which would be familiar to any audience from the last four hundred years. Punch brings our faces up the glass of our seemingly safe and normal reality and then pushes us through the window, laughing and wondering why we might complain about his right to be right all the time. With most of the Antipodean references adjusted so as to be understandable to us poor Poms this is a show with heart and it’s nice to see a company have so much fun with such a classic piece of traditional theatre and allow its energy and threatening allure to delight. It’s hard to be so very wrong and get it so touch perfect right, these performers know the line and effortlessly walk it with verve.

So, as I said, a sophisticated piece of well researched theatre hiding under a deliciously strange and bizarre production. Mr Punch is always the perfect mirror to our times, hence his survival and here, he’s made to reflect at his wickedness and the consequences of his behaviour which ranges from online porn and work shy wanking to infanticide, sexual abuse, domestic violence, homophobic killings and other casual murder, but lets not chat about despair here, this is not the point. Café Debris have slipped in as many seriously funny throw away lines as possible and the show is as tightly scripted and provocatively funny as it is quotable, crass and snort your drink out your nose in shock.

Christine Firkin, Tim Garnham, Billy O’Riordan and Brent Thorpe all pull some excellent performances and work together to keep the narrative tension as tight as a noose; with some creepy and wonderfully wacked out one off performances. Mr Punch’s Cabaret; the show within the show made me laugh and laugh and laugh with an onstage freakshow of delightfully strange Judy Garland’s ‘I may cry no, no, no, no, no, but do it again’ then lust a little at the most perfect tight butt and sexy sequined posing pouch I’ve seen on stage in the last year.

For more info on the show and cast see their website here:

There’s a little of everything in this brave deconstructive show which appears to be a commentary on the Australian and Western Hetro male and all his triumphs of self-delusion, but Mr Punch is at heart deeply subversive and you’ll find yourself laughing at the dark side but laugh you will. Punch triumphs at the end and for that this terribly rogue wins our hearts, it’s a plot device which challenges us. Director Billy O’Riordan has pulled some energetic and committed performances from this team of talented actors and singers and it gels well, but is still a classical piece of Commedia dell’arte, subversive, raucous, very modern and savagely satirical.

If you like your cabaret funny, strange, familiar, creepy, shocking and seriously entertaining then get yourself along to the Marlborough Theatre as soon as you can, Café Debris are only here until September 8 and I would recommend you catch this show while you can.

(Bravo Darlings! I left laughing and anyone that can work such lovely classical music into such high-end bizarreness deserves an extra nod of appreciation from this cynical old critic.)

Catch The Cafe Debris Company and their fresh from Edinburgh show, The Fabulous Punch and Judy Show now. A popular feature at Sydney’s legendary Imperial Hotel (featured in ‘Priscilla Queen of the Desert’) you can now enjoy some of Australia’s best Po-Mo-Ho-Mo export in Brighton,

For more details or to book (and book now!) see the Theatre website here

Please note this show is not suitable for children at all.