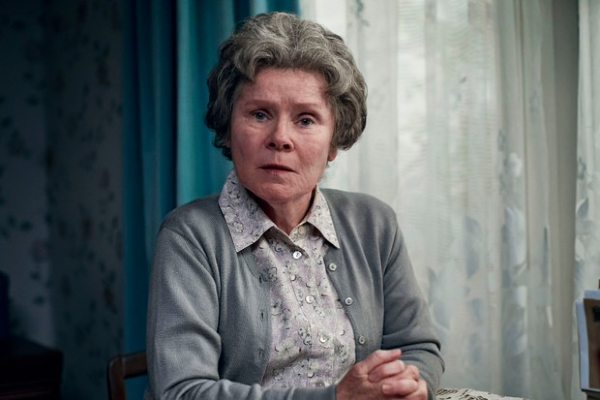 There’s a PhD thesis to be written on how  gay male writers excel at creating women of a certain age. There’s a small army of them – Porter, Hart, Herman, Sondheim , Coward and Rattigan on stage, and in TV Harvey and Warren on Corrie . Alan Bennett bestrides both media like a colossus and this reinvigoration and extension to his original monologues is priceless.

Difficult to believe this is the same BBC which in this very  week gave us the over-priced, over-dressed, over there saga The Luminaries, but it’s a broad church, the Beeb.

All of the monologues were filmed at Elstree Studios in the vacant BBC studio sets of its well known soap opera, giving the pieces a familiar, cosy feel, as we know those spaces so well, but they are lit in strange new ways which makes them curious in themselves.

Imelda Staunton kicked off on amazing form with Lady of Letters, filmed in Dot Cottons Eastenders sitting room, is a nicely turned piece with a surprise, rather joyous ending, albeit in a strange location ( I’m trying not to spoil too much ). Bennett manages to make what seems just a well-meaning busybody into something far more mean and sinister, and he does it so imperceptibly that we are led down the path.

She creates her character , builds and surprises within the confines of her room and our attachment and attention is totally with her.

Sarah Lancashire as the bored house-mum in An Ordinary Woman, gives a shattering performance as she unravels a difficult, frighteningly plausible tale about a love that must not speak its name. Only Bennett could get conversational humour out of a very controversial subject and probably only Lancashire could make it work – a stunning performance.

Harriet Walter in episode 3 is a very posh, self-assured widow on the day of her well-to-do hubby’s funeral. She covers her grief with throw-away humour bu we see beneath the bravado. Then just as you think you’ve got the measure of the story Bennett does what he’s best at – he drops a hint; creates a few nuanced lines – usually of doubt or concern and off we go down a different little lane.

Often the reveal is to us but not to the character uttering the lines, and that makes us feel superior , which is clever, clever. So here what seems a small action leads to a devastating collapse of Muriel’s life.

Episode 4 – though you can watch them on iplayer in any order, sees Jodie Comer as a bit-part  actress who you just know shows such well-meaning naivety that she’s going to get in above her head. The delicious humour is that we again are in the know, and she isn’t . It also has a terrific opening line: “ I shot a man last week in the back, with a harpoon gun… on purpose “

“Acting is giving” she tells us and these monologues are certainly a gift-wrapped present to the fine array of actors, co- producer Nichols Hytner has assembled .

You can watch Talking Heads at various dates on BBC1 or the whole series is now on iplayer here. More reviews of it to come from me.