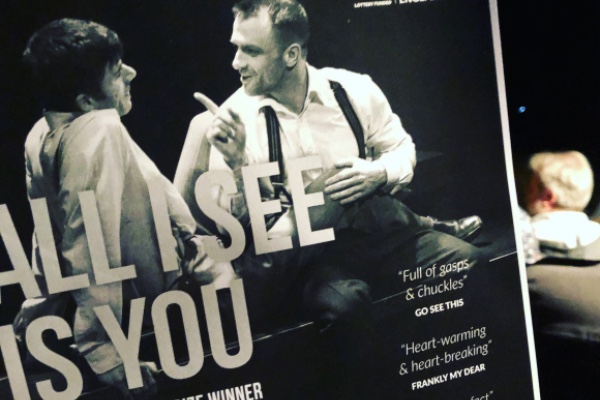 It’s 1967 and we’re in Bolton – a town that merges imperceptibly into the Manchester conurbation. We meet Bobby, a cheerful chappie who works at Woolies and is just coming to terms with his burgeoning sexual awareness. And then there’s Ralph, quiet , reserved, intellectual, about to become an English teacher and initially much more forward in his sexual advances.

Local Brighton writer Kathrine Smith’s play is a tense, taut, funny, tragic double-hander, we move rapidly from a fumbled encounter in the inevitable toilet cubicle to something far more serious in their on-off relationship.

This is no linear boy-meets-boy and happy-ever-after romance. Homosexual acts were  still illegal and it’s I guess inevitable that these two guys who just want to find happiness with each other will fall victim to a system that encourages some police officers to be vindictive, coercive and uncaring.

But that’s as nothing to what is to come. Fairly common at the time, I recall, Ralph decides it’s all too dangerous and tries to revert to being heterosexual with a steady nice girlfriend. Bobby, initially shy, now plays the Canal Street field, becoming bitter and angry about Ralph’s rejection.

Of course when they meet again, their affair is back on and with a vengeance, though Ralph is deeply worried about “ being found out “ and losing his career – which in those days believe me would have been almost a certainty.

The inevitability of their personal tragedy is painful to watch, especially the juxtaposition of their separate police “ interviews “ . I wont’ give too many spoilers , except to say that the most harrowing scene where Ralph opts for aversion “ therapy”  – chemical castration and electric shock – is the most gruelling few minutes of this play, coming as it does from Ralph’s small, still voice.

The ending I found ambiguous- maybe it’s deliberately so – we desperately want to know what happens next, and perhaps Kathrine will write a sequel. I do hope so.

The play, originally written for the Bolton Octagon Theatre,  won a major award at last year’s Brighton Fringe and the writer has decided to release a recoding of it now the show has finished touring in the UK and abroad.

Ciaran Griffiths as Bobby, is hunky, very loveable and human. Christian Edwards as the introverted , damaged Ralph is a wonderful foil and both actors play brilliantly off each other getting bucketloads of laughs among the tears.