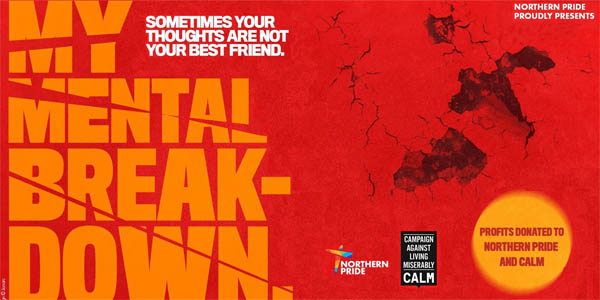 A musical play about the hidden struggles of mental illness will reach a larger audience, thanks to support from a leading North East LGBT+ charity.

NORTHERN Pride, which organises the annual Northern Pride Festival, has partnered with the team behind My Mental Breakdown: A Musical, to bring the production to Northern Stage, at Barras Bridge, Newcastle.

The show will take place during Mental Health Awareness Week on May 18, with the evening forming a part of the wider Northern Pride Festival programme of events.

Written by Max Kingdom, founder of the Canny Fringe Festival, the semi-autobiographical production follows an LGBT+ couple affected by suicide and aims to highlight the fact that mental health issues are not always noticeable.

The show first opened at The Exchange, at North Shields, in March and the partnership aims to give the production the opportunity to reach a wider audience at a larger venue.

Ste Dunn, chair of Northern Pride, believes the show will strike a chord with audiences.

“The team have taken a very difficult, but incredibly important, subject matter and created an amazing play which is a really emotional experience to watch,” said Ste.

“Although the stigma surrounding mental health is lifting, many people still find it a difficult subject to address and productions like this are helping to create a discussion around it.

“We are really pleased we have been able to have a part in getting the play to a wider audience and I hope people will make the effort to go and see what Max and the team have put together.”

The production is one of a number of satellite events organised by Northern Pride in the lead up to the Northern Pride Festival weekend, which takes place from July 19 to 21.

The show’s producer, Emily Fay Palmer-Giles, said: “The entire team is massively excited to see the production return with the help of Northern Pride.

“The show was a huge success the first time around and we’ve had lots of messages from people who are grateful to see representation of mental illness, or who have gained more of an understanding of what it can be like to live with it.

“It’s a powerful show with a very strong message and we’re so grateful to have this support and be working alongside a fantastic charity.”

The Northern Pride Festival will take place across two locations this year, with the Festival Arena at the Town Moor hosting the main stage and fun fair, and the Community Village taking place at Exhibition Park with the Curious Arts Stage, Health and Wellbeing Zone, Rainbow Village and much more.

For more information about Northern Pride or any of the satellite events, click here:

Event: MY MENTAL BREAKDOWN – The Musical