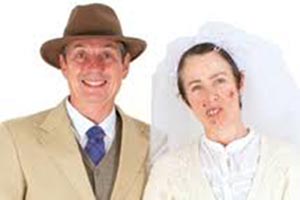 Harking back to the golden days of British comedy films like Kind Hearts and Coronets, this absolutely ridiculous piece of theatre by Button Pressed films, starts implausibly in a little house of mystery in Ealing and just gets dafter.

Written, directed by and starring Simon Messingham, we meet four characters who are not at all what they claim to be.

Messingham as the fortune-hunting Prof Price, who supposedly runs a music conservatoire in White City, is on the eve of his wedding to the unbelievably waspish dragon, wart-riddled Emma, played deliciously awfully by Elizabeth Downes.

Emily Piercy as her manic sister Felicity, who has a fear of the outside world, is a delight to watch as she prances manically round the tight little stage claiming she is “too beautiful for this world”.

Prof Price has the sharp repartee of a Groucho Marx as the situation becomes more and more improbable, and the matter of a family fortune in African diamonds rears its deadly head.

The 4th character, Sellers, played by Isaac Finch, is in many aspects not properly developed and explained and as the plot unfolds he adds a complication not really necessary to the slick running of the story. His one moment of triumph is to burst into unexpected song in one of the more surreal episodes of this mock-farce-cum-melodrama, which owes as much to the Young Ones as it does to Margaret Rutherford or Alec Guiness.

As the show grows to a close, in the sauna-like heat of this small theatre space, the plot unravels and we learn some of the truth of what is going on, but the absurdist nature of the dialogue and storyline makes for contradictions and confusions, which could be ironed out with a bit of judicious editing and rewriting.

But if you like frenzied acting on a par with the League of Gentlemen, you will absolutely love it to bits.

The show continues at Sweet Dukebox( at the Southern Belle pub ) until May 31 at 10.30pm.