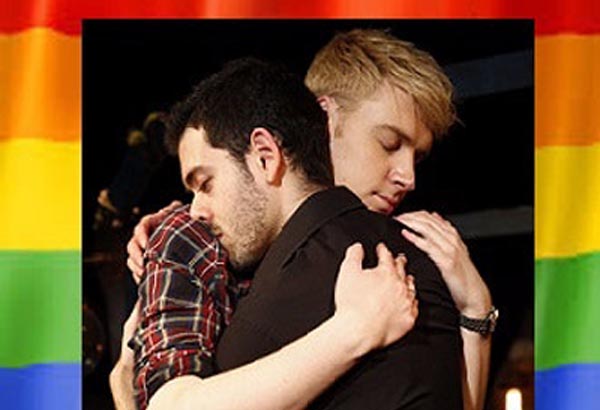 These three short vignettes, written and directed by Nick Myles and presented by Hidden Bell and Oddservants couldn’t be more different.

We open with a three-hander, modern-day gay farce, complete with boy in underwear, witty and bitchy one-liners and a neat little ending. Young cutie is waiting for his new date to turn up when cutie’s best friend appears.

Dumb male model and outrageous queen of a dental nurse are pitched again the older bi-sexual charity worker who has a child. Yes they are stereotypes to some extent but the maximum humour is extracted at each character’s expense. The denouement is hardly surprising.

The second playlet is altogether a different kettle of fish. Performed as a monologue to us or to a third party, it stars off at a frenetic pace of self-justification and self-deprecation, played with impeccable timing and huge nervous energy by William McGeough.

As the narrative unfolds we learn this too is about on-line dating, but this time with devastating results. Just as we are about to learn the truth of the encounter, the character double-backs and tantalisingly glosses over the facts – although there is a some shockingly funny explicit descriptions of their physical encounter.

The humour changes rapidly to fear, panic and sadness as we learn that the other “man” is in fact a trans f to m and pre-op. There’s still humour here when discussing “the thing that wasn’t there “.

It’s a tour de force from the actor and eventually we learn that the hearer of this monologue-confession is a police interrogator. The ending is shocking, sad, unpredictable and highly believable.

The third play Brighton-Damascus, again about an on-line romance, begins with some beautiful characterisation from Freddie Wintrip and Reece Mahdi. In monologue and conversation we see their long-distance relationship  blossom and their portrayal of cyber-love is very touching.

The long-distance romance of course turns out to be fatal and tragic as the Geordie call centre worker and the closet gay Syrian move ever closer to actually meeting.

The ending is harrowing, graphic and all too realistic of what is happening today.

Three takes on gay love that are well worth seeing.

Trouble with Men has ended its run at the Warren Studio 2.