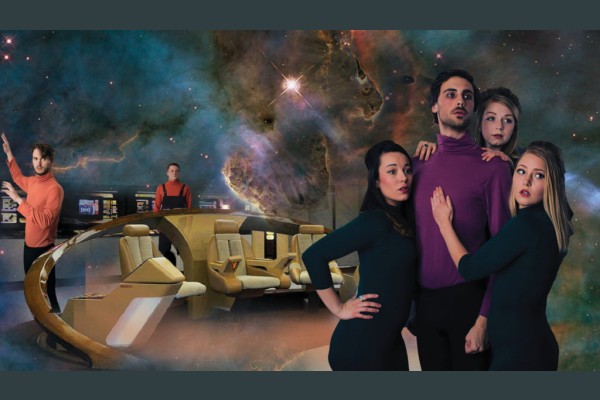 Captain Harrison (Vere) has objectively been proven by the ship’s computer to be Starfleet’s bravest and most handsome captain. Perhaps his character owes some small debt to a certain James T. Kirk – like Kirk, Harrison wears the same tight polyester outfit, is irresistible to women and has something which often sounds like an American accent. Although there is a nominal villain in the form of Zaglar, it’s fellow crew member Evans (Aiden Willis) who seems to be bear the brunt of Harrison’s contempt.  Willis is eventually pushed to breaking point as his, and the cast’s, resentment of getting paid nothing to appear in a crap show results in them breaking the rules of theatre and rewriting the show on the hoof. Rather in the manner of Kirk taking the Kobayashi Maru test.

It’s a lovely evening of theatre, and I certainly look forward to Vere’s next production. My only quibble would be the show’s paucity of actual, crafted jokes. Though as the whole enterprise (pun intended, obvs) runs perfectly well on its leading character’s demented self-belief maybe it doesn’t needy anything more sophisticated than some missed cues, knitted space aliens and some terrible, terrible songs.