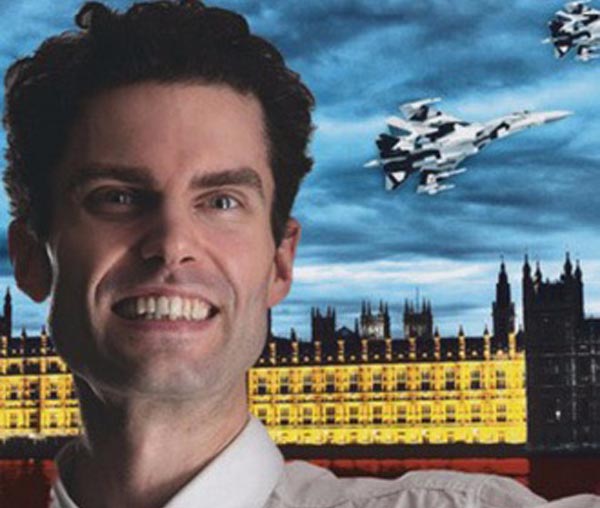 It’s 1994- the young ambitious Tony Blair and the irascible Gordon Brown meet three journalists – ‘hacks’ in a stairwell in Parliament.

The “weird journalists” predict TB will be Leader of the Labour Party, Prime Minister and King of the World.

Thus starts MacBlair, performed at the Warren Studio 3 by Falling Sparrow Productions. It’s a cruelly hilarious political romp through the rise and fall of both Blair and Brown and the fortunes of UK politics to the present day.

Through a lot of ripped off and rapped dialogue from Shakespeare’s Macbeth, we travel on a rollercoaster of major events – Northern Ireland peace process, 9/11, WMD and the Iraq War, the Chilcott Inquiry and Gordon’s final ascent to the throne of Premiership.

The impersonations are impressive, the pace exhausting and the talent on display truly amazing. You had better know your Macbeth and your UK politics to keep up.

TB is described as the “milk of human keenness” which typifies the puns and parodies throughout. When defending his position on Iraq, he says: “Is this an audience which I see before me ?”

On the issue of the so-called dodgy dossier, he says to Campbell: “If it were done t’were well it were done quickly.”

And there are lots of asides, one-liners and modern intrigues. Asked if he aggress that the WMD dossier can be acted on, Campbell replies: “Don’t ask me, I just deal in appearances.”

Tony pleads to Gordon: “Can I have some money Gordon ?” Gordon replies:  “For what ?”. Blair says: “To run the country “.

What the play cleverly does is compares the progress of Macbeth with that of Blair – both men who believe the poison which is poured on their ears, both of “vaulting ambition.” And in Blair’s case brought down by the media who built him up. And of course the villains are better written and more successful than the good guys. In the end the media having literally devoured Blair, move on to tackle Donald Trump.

A brilliant concept, very tightly written and marvellously acted. I would have liked to name the cast and author, but despite 3 requests to the production team I failed to get the details. In terms of their publicity: “things can only get better”.